The public returned to St Peter’s Square on Sunday to receive Pope Francis’s blessing from his window for the first time in nearly three months as he convoked a year of reflection on the environment.

Only a few dozen people went to the square, which was reopened on Monday along with St Peter’s Basilica following coronavirus lockdowns. They kept to social distancing rules and most wore masks.

Francis delivered his message via the internet from his library, as those in the square watched on large screens, and then went to the window for the silent blessing. In the past three months, he has blessed an empty square. 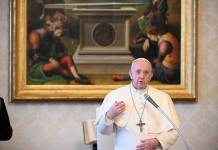 Sunday was the fifth anniversary of his encyclical “Laudato Si” on the care of the environment, which called for a reduction of fossil fuels and backed the majority scientific consensus that human activity is partly to blame for global warming.

He urged Catholics to reflect on the environment for the next twelve months, how they can better protect it and how to help those most vulnerable to the effects of climate change.

He also sent special greetings to Catholics in mainland China on the day they celebrate a national religious feast day.

Catholics in China are emerging from more than half a century of division which saw them split between a state-backed “official” Church and a “non-official” underground Church loyal to Rome.

In 2018, the Holy See and Beijing signed a historic pact on the naming of bishops, meaning all bishops recognised the pope’s authority.

But there have been hiccups. In June, the Vatican asked Beijing to stop intimidating clergy who refuse to sign an official government registration.

The deal, which is up for renewal in September, has split Catholics in China and around the world, with some critics saying the pope caved in to the Communist government.