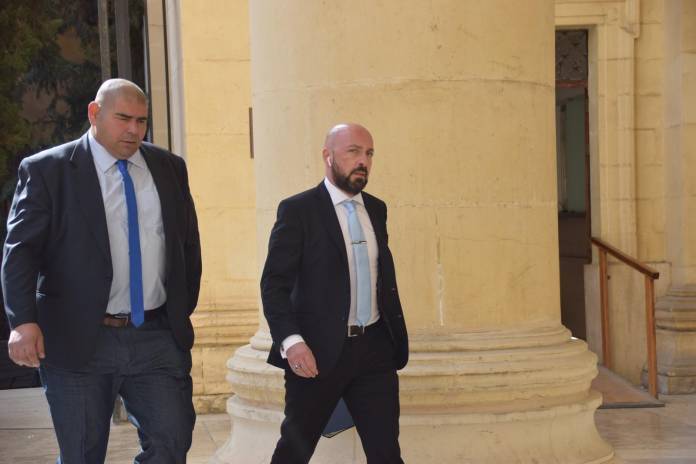 With Keith Schembri, he used to review all media reports every morning, it was part of his job says Gafa.
Amy Borg
16:32 Lawyer Jason Azzopardi says he is not believing Gafa's testimony when he says he did not discuss Camilleri's involvement in Daphne's assassination.

Says he did not ask Kenneth Camilleri about his involvement in Daphne's murder and he did not meet Melvin Theuma.

Whenever they used to go abroad, Camilleri never used to be armed, says Gafa.
Amy Borg
16:25 Gafa says how Keith Schembri was worried when he lost his mobile phone. Then says that Schembri did not tell him he refused to give details regarding his mobile phone.
Amy Borg
16:21 He explained that when they knew where the boats were located they had informed Libyan authorities.
Amy Borg
16:19 He says that thanks to his intervention in Libya, thousands of illegal immigrants were stopped from entering Malta. He said it was not a push back.
Amy Borg
16:16 There were times when he was asked to remove certain posts on Daphne Caruana Galizia.
Amy Borg
16:16 He also says that Gafa used to meet people with the then Gozo Minister Anton Refalo.
Amy Borg
16:15 Gafa says his contract was terminated by Fearne without being given any reason.
Amy Borg
16:14 Gafa says he used to work in Gwardamangia and upon his request went to work in Gozo upon approval of Minister Chris Fearne.
Amy Borg
16:13 Lawyer Jason Azzopardi starts questioning Neville Gafa.
Amy Borg
16:12 He then mentioned how he used to go for walks with Keith Schembri and that he had discussed Schembri's resignations with Schembri himself.
Amy Borg
16:10 Gafa says he had shared blogs from the Truth Project and the shares were in 2018.
Amy Borg
16:03 He says he never compared Daphne's funeral to Carnival.
Amy Borg
16:01 Gafa says that he once saw Daphne Caruana Galizia in Valletta. He had uploaded a photo of her on that day but it was not him who took the photo.

Lawyer Therese Comodini Cachia asks Gafa if he thinks he is to be believed.

Gafa replies, yes because he is under oath.
Amy Borg
15:58 Neville Gafa says that Muscat's security officials fall under the secret services.
Amy Borg
15:56 He mentions that due to what Daphne had written about him in her blog, his father had suffered from a stroke, 3 years ago. And says that his children did not report to work because of what Daphne used to write about him.
Amy Borg
15:54 Neville Gafa says he knew Daphne Caruana Galizia prior to his involvement in politics. Says he assisted her when shopping from a shop in Valletta.
Amy Borg
15:54 He says he does not know why people used to send him photos of Daphne.
Amy Borg
15:51 Gafa says he never discussed 17 Black with Keith Schembri. He also says that Yorgen Fenech and Keith Schembri are good friends. But he never saw them at each other's house.
Amy Borg
15:49 The inquiry board asks Gafa if, when Daphne was killed, there were people who cheered for the news. Gafa says he did not see any celebrations and that he only saw people getting worried.
Amy Borg
15:48 He confirms to have uploaded a photo of Daphne Caruana Galizia before she was murdered. Gafa says he received it from people who were in Floriana.
Amy Borg
15:47 He says he never attended briefings on Daphne's assassination.
Amy Borg
15:45 He confirms he had a diplomatic passport issued by the Office of the Prime Minister and that he only used it once for a visit to Libya.

Gafa says he never travelled with Keith Schembri and he never met Schembri outside of Malta.