Yes, replies Formosa.
Amy Borg
15:55 Asked by Lawyer Therese Comodini Cachia if she had a direct order from the then Minister Carmelo Abela, she confirms and adds that she does not recall if the reason behind it was mentioned or discussed.
Amy Borg
15:54 She also says that it is also common that changes or transfers take place, during the 3-year posting of a diplomat.
Amy Borg
15:53 She also confirms that usually, a posting has a duration of 3 years.
Amy Borg
15:51 She confirms that the decision was taken a month after the 2017 general election.

The board only wants a yes or a no as a reply. 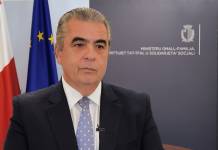