MEP David Casa gave his testimony on Friday during the Public Inquiry into the murder of journalist Daphne Caruana Galizia.

Casa claimed that authorities in UAE assured him they would be ready to cooperate and provide the necessary information on 17 Black. The MEP also testified that lawyers of former Chief of Staff at Castille Keith Schembri had threatened him. David Casa said that Schembri’s lawyers had sent him a letter.

Schembri’s legal representatives, Lawyers Edward Gatt and Mark Vassallo issued a statement to deny they ever made direct or indirect contact with MEP David Casa.

The connections between 17 Black, Keith Schembri and Konrad Mizzi

The operations of Pilatus Bank and Nexia BT

Details on corruption on the Montenegro wind farm deal

€1 million to be transferred to Cheng Chen – the person who negotiated the deal between Enemalta and Shanghai Electric.
Amy Borg
10:15 The board of inquiry is now asking Casa questions on the FIAU report and 17 Balck.
Amy Borg
10:12 David Casa is explaining that while doing his work he felt that the Maltese Authorities were obstructing his work.

"I was described as a traitor by the Maltese Government" – said Casa who continued saying that as an MEP he wants to represent and defend the interests of the Maltese and that he will continue to do so no matter what.
Amy Borg
10:11 These two companies were the companies that opened the offshore companies to politically exposed persons within the Maltese Government.
Amy Borg
10:10 Casa said that authorities should not forget that Nexia BT was representing Mossack Fonseca.
Amy Borg
10:07 The owner of Pilatus Bank, Ali Sadr should be extradited to Malta to face criminal charges in relation to money laundering, said Casa and that Nexia BT was the company used to facilitate all this.

Until today Nexia BT is still licensed to operate.
Amy Borg
10:05 Casa explained that he was handed the report by officials within the FIAU who felt that the police was not investigating as it should when it comes to money laundering and Pilatus Bank.
Amy Borg
10:03 Lawyer Therese Comodini Cachia is asking Casa to explain the details on the connections between Keith Schembri and Konrad Mizzi as reported in the FIAU report.
Amy Borg
10:01 Through the FIAU report it could be understood that there was a link between the Noor Bank and the Montenegro Windfarm project.
Amy Borg
09:59 David Casa is now explaining the FIAU report, which he had received but did not publish because the law, at the time, did not permit him to do so.
Amy Borg
09:58 "I am sure that with my work I was irritating Yorgen Fenech" – said David Casa.
Amy Borg
09:56 David Casa said that he has no proof of money transactions between the PN and Yorgen Fenech, so that he would not be elected again as an MEP during in 2019.
Amy Borg
09:54 "We left Daphne on her own. She was vulnerable and it was at that time when she was murdered" – said Casa.
Amy Borg
09:51 David Casa said that following the reports filed with the Police, the Police Commissioner informed Casa that he is ready to shut down the Gzira Police Station in order to provide him with the protection of Police Officers.

Casa said that he was not ready to deprive the Gzira residents of having a Police Station that is open for their service 24/7, therefore he did not accept the offer.
Amy Borg
09:50 He confirmed that the threat by Schembri's lawyers was received by a letter sent directly to him.
Amy Borg
09:47 He said that he has also been threatened by Keith Schembri's lawyers when he had presented a report compiled by the FIAU.
Amy Borg
09:45 Casa confirmed that whenever he is out of the office he does not feel safe, even when abroad.

There were times he asked for the Police Force to provide him with protection.
Amy Borg
09:43 Casa said that even though he is not part of the Police Force, as an MEP he felt the duty to investigate.

Casa said that he too has been threatened.
Amy Borg
09:40 The board is asking David Casa to give the facts on the information regarding the offshore company 17 Black.
Amy Borg
09:39 MEP David Casa takes the witness stand.
Amy Borg
09:38 The board has entered courtroom 20.
Amy Borg
09:32 The board of inquiry is led by Judge Emeritus Michael Mallia, accompanied by former Chief Justice Joseph Said Pullicino and judge Abigail Lofaro.
Amy Borg
09:31 Bartolo was the first minister to testify in the public inquiry. 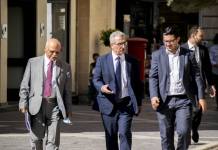