Two people have been killed and another was injured during a third night of unrest in Kenosha, in the US. Protests in the city unfolded following police shooting of a black man, Jacob Blake, which happened on Sunday.

Blake, aged 29, didn’t die but according to his lawyers, it would be a miracle if he could ever walk again.

The Police did not give details on the victims. American media is reporting that the protests turned into violence after a conflict between the people protesting and armed men who were guarding a petrol station.

Within hours of Blake’s shooting, hundreds of people joined protests and have marched on Kenosha’s police headquarters.

In May, four Minneapolis police officers were fired over the death of an unarmed black man seen in a video lying face down in the street, gasping for air and groaning, “I can’t breathe,” while a white officer knelt on his neck for several minutes. 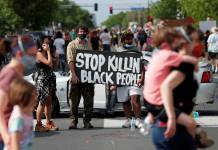