Anti-corruption activists seeking justice for Daphne Caruana Galizia joined in Republic Day celebrations with placards and whistles on Friday morning. What followed on Saturday was a statement reacting to various comments made on social media saying that the organisers sought no permit. The police, however, confirmed that a meeting was held with the organisers.

Aditus Foundation reminded that exercising the right to peaceful assembly should not be subject to the permission of the authorities and that activists do not need to apply for a permit to be allowed to protest. The right to freedom of assembly is protected under the Constitution, European Convention on Human Rights, the Charter of Fundamental Rights of the European Union and the International Covenant on Civil and Political Rights. 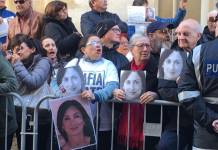 On Wednesday morning, Police Chief Lawrence Cutajar requested a meeting with Repubblika. The meeting was held at 11:30am. Marion Pace Asciak, Robert Aquilina, Deputy Police Commissioner, an Assistant Commissioner and Police Superintendent were present for the said meeting. The Police Chief reportedly told the organisers from Repubblika that he was deeply worried about the “protest” adding that if they submit a permit application he would refuse it adding that he feared that ‘something might happen’.

Speaking to Newsbook.com.mt, Aquilina said that they explained to the police that the activity which was organised by Repubblika and Occupy Justice was not distinct from the activities organised by the state. The organisations urged the public to participate in the public activity and show their disapproval.

The Police Chief reportedly told the organisers that he was relieved to hear about their plans. Aquilina explained that the Police Commissioner asked them to issue a statement on the way forward which was agreed upon. Both the activists and the Police cooperated fully on the day.

Reacting to comments made by Home Affairs Minister Michael Farrugia, Aquilina said that the Minister is either ignorant of the situation or is actively seeking to deceive the public.

‘The police commissioner told us that as long as we remain behind the steel barriers, we would be observing the law and therefore had no objections to this,’ Aquilina quoted the Police Commissioner telling them during the meeting held on Wednesday.

In a joint statement, Repubblika, Occupy Justice and manueldelia.com said that they did not understand why the Police Commissioner had to issue such a press release, noting that on the one hand the Police stated that they were informed about the activity two days in advance and on the other hand claiming that the organisers did not request a police permit.

In their statement, the organisations said that the National Festivities Committee is responsible for organizing the events on Republic Day – and it is assumed that they would be in possession of a police permit. ‘Each and every Maltese citizen was invited to attend, and that is precisely what we did,’ the statement reads.

The organisations observed that the law does not restrict one from holding placards, whistling or shouting slogans.

The organisations said that they do not think they have breached any laws, adding that the police commissioner was free to charge organisers with an offence or else stop harming the good name of citizens exercising their fundamental rights.