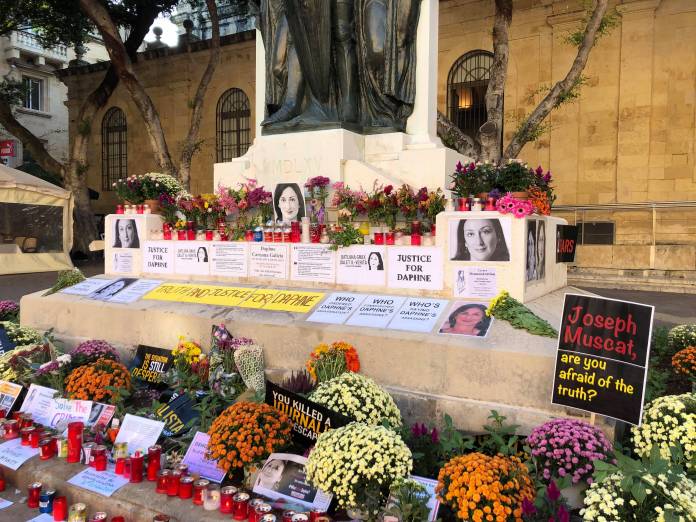 The protest memorial dedicated to journalist Daphne Caruana Galizia has survived the night, a day after the protest which marked two years since her assassination.

For several months, the memorial situated at Great Siege Square has been a battleground between activists and government cleaners, the latter “cleaning” the protest memorial every night. Last year, on 8 September the Great Siege monument was all boarded up for “restoration works” when Valletta held the European Capital of Culture title.

Read: Watch: Activists reclaim monument as unannounced restoration is over

This has drawn the criticism of many, including press freedom organisations such as Reporters Without Borders which have called on the government to stop removing the tributes left to Caruana Galizia.

Every day, activists turn up every morning to leave tributes for Caruana Galizia as they keep demanding justice.

A case was filed before the Constitutional Court against Justice Minister Owen Bonnici and others, arguing that the removal of the protest banner, candles and flowers was a case of censorship and was in breach of his right to freedom of expression.

“Freedom of speech can only be said to exist if you can say uncomfortable truths. Daphne’s murder is a stain on our country’s reputation and our values. Just because it’s an ugly truth doesn’t mean it shouldn’t be said and certainly doesn’t mean we should ignore it and pretend it didn’t happen.”