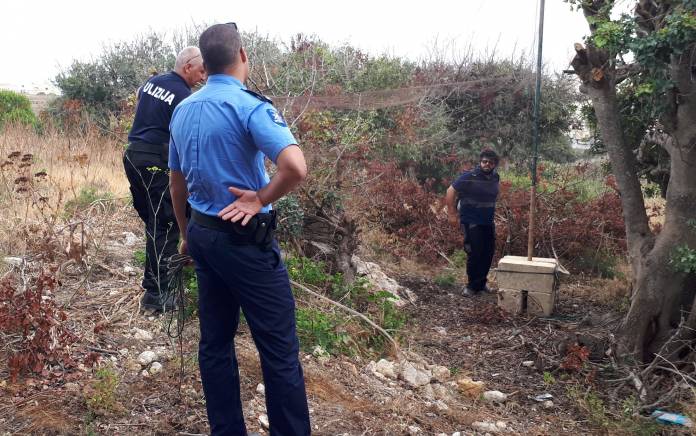 Poachers on Gozo have destroyed protected Carob trees to make way for an illegal bird trapping installation in a public family park near Qala on Gozo, the Committee Against Bird Slaughter (CABS) said in a statement.

CABS explained that to catch protected birds, unknown persons had installed a large vertical mist net inside the park area which at the moment is not being maintained and the net was spanned between two 5-meter-high poles and was about 8 meters long.

Fiona Burrows, CABS Wildlife Crime Officer stated that when she spotted the net through her binoculars she could see several dead birds hanging in it.

CABS reported the case to the police who arrived within 20 minutes and with the help of the birdwatchers they dismantled and confiscated the net.

A total of five dead protected birds; a Wood Warbler, a Spotted Flycatcher and three Spanish Sparrows were found entangled in the net.

The Committee Against Bird Slaughter said that these poor birds have suffered a long time before they finally suffocated or died in the hot sun.

Whoever is responsible for this should not only be punished for breaking the hunting law but also be held accountable for this irresponsible cruelty to animals, Burrows stated.

While the police were on-site they also found that the poachers had cut several protected Carob trees to erect the net. CABS said this is a very severe case which involves trapping and killing of protected birds, brutal cruelty to animals as well as the destruction of protected trees on government-owned land.

CABS said that they now expect the Gozo police to conduct a full investigation and use all means to identify the culprits.