The latest polls continue to place the Labour Party (Partit Laburista) in position to take four seats in Saturday’s vote on the European Parliamentary Elections.

Based on Malta Today’s data, over half (57.8%) of Maltese voters intent to vote for the Labour Party while 39.1% would favour the Nationalists (Partit Nazzjonlista).

A separate poll conducted by MISCO place PL at 55% of the national vote compared to 40% for the PN. A smaller 3.4% favour the third and smaller parties.

Projections place the number of Group seats unchanged for the S&D but EPP could lose more than first thought.

According to the European Parliament predictions in April, the Progressive Alliance of Socialists & Democrats were projected to lose seats from 186 to 149 in the 2019 elections. The Financial Times latest projections show that the reduction will roughly the same one month. As for the European People’s Party, the initial projection was that the group would decrease in seats from 217 to 180. FT projects that the EPP could lose a further 9 seats bringing them to 171.

While there will be big losers in the European Elections, there are also expected to be big wins for the ALDE and for smaller green and nationalist party groups.

The Alliance of Liberals and Democrats for Europe were also projected in April’s projections to increase from 68 to 76 seats. The FT projects that the group will increase to 97 seats.

The European Greens/European Free Alliance also were projected to make big gains from 52 to 57 according to the EP. FT estimates that this is more like 54. 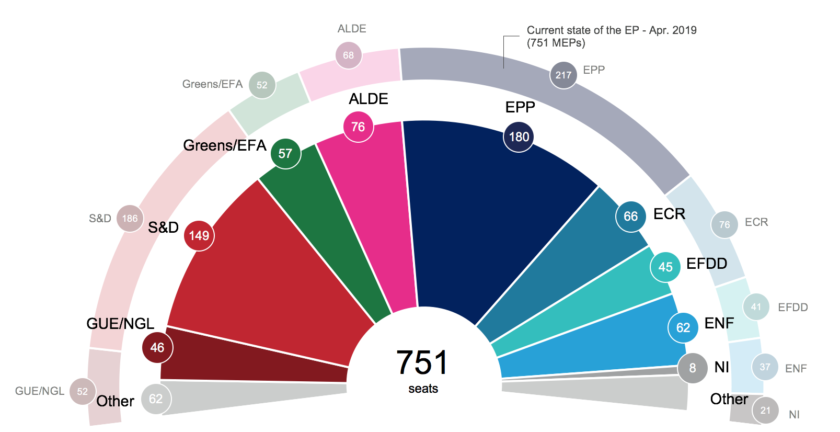 The Europe of Freedom and Direct Democracy were initially projected to gain seats in April, from 41 to 45 seats. The latest projection from FT suggests this could increase to 61.

The far right, Europe of Nations and Freedom group were expected to increase their seat numbers by almost half according to April projections. This placed them from 37 to 62 seats. The Financial Times currently estimates this to be closer to 55.

On the other hand, the European United Left/Nordic Green Left, are expect to lose. The EP projected in April that this would be a reduction from 52 to 46 seats. The Financial Times projects that they will lose a further seat, bringing to them 45.

The European Conservatives and Reformists were projected to lose 10 whole seats in April’s estimation, from 76 to 66. FT projects this to be closer to 57.

This document can be viewed here

Joseph Giordimaina   August 3, 2020
The PM stated that his duty is to safeguard the “lives and livelihood” of citizens of Malta and Gozo.