Informed sources speaking to Newsbook.com.mt have accused director of prisons Alex Dalli of playing favourites at the Corradino Correctional Facility, stating that the retired AFM colonel even personally took three ‘privileged’ inmates out for a swim at Rinella.

Relatives of inmates at the CCF had told the newsroom that a number of inmates were considered to be in Dalli’s inner circle, and that they would help him with prison maintenance. On one occasion, it is understood that Dalli drove three inmates to Rinella for a swim, with the prison director himself stripping down to his underwear and jumping in.

Such behaviour, Newsbook.com.mt is informed, is in breach of prison regulations and of the Public Service Management Code. In any case, observers confirmed, the director had greatly overstepped professional boundaries.

What the PMSC states

According to the PMSC:

The preferential treatment apparently exercised by the prison director would also fall foul of the code.

Newsbook.com.mt has sent questions to the Home Affairs Ministry to confirm whether the beach trip was covered by an application for prison leave, or whether a special permit was granted by the ministry’s permanent secretary. However, no reply has been forthcoming.

The law does permit prison leave, with the minister responsible for home affairs empowered to issue directives which would allow inmates to temporarily leave the prison under supervision, to attend or participate in sport or cultural events.

The prison director may also approve prison leave on special occasions – such as births, weddings, funerals or visits to a seriously-ill relative – and to allow inmates to pursue educational opportunities.

But prison regulations are also clear that prison officers should not participate in any activities that would hinder their ability to carry out their duties impartially, or which could give the impression that this is the case. They are also directed not to engage in behaviour which could dent the prison’s reputation, whether on the job or in their free time

Division 18 set aside for chosen few

Newsbook.com.mt’s sources explained how Dalli has set aside Division 18 for the inmates who serve his aim. At present, four inmates are detained in Division 18, and in contrast to all other divisions, they are not kept under supervision, and are left free to enter or leave it on their own accord.

Division 18 has taken the place of a playroom and bathroom which were previously being used by prisoners who have been granted access to their children under the supervision of Aġenzija Appoġġ.

The present prison management has proven to be no stranger to controversy, with Newsbook.com.mt revealing last May that BBQs and dance parties had been organised at the CCF. The events, held for prison employees, ran until the small hours and considerable amounts of alcohol were served, and illegal fireworks were even launched on one occasion. 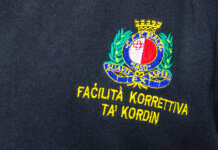 Newsbook.com.mt also revealed that last July, the Principal Permanent Secretary had looked into a complaint that a number of persons where witnessed entering the prison drunk at 4am. The alleged incident took place early on Sunday, 11 July, well outside office hours.

John Paul Cordina   January 12, 2021
The Home Affairs Ministry announced that a group of failed asylum seekers were repatriated to their country of origin in an operation coordinated by the Immigration Section of the Malta Police Force.