President George Vella said that the Constitution does not give him any power to act in the current political crisis.

In a statement on Friday, President Vella reiterated his call for unity, adding that despite the various calls being made for him to act, he is limited by the Constitution. Further, he cannot do more than he is already doing.

The country went into a crisis which was triggered by the murder of journalist Daphne Caruana Galizia. Some progress was made over the past two weeks – including the arraignment of 17 Black owner Yorgen Fenech. Alleged middleman Melvin Theuma who was granted presidential pardon started testifying in court this week. Konrad Mizzi who was resigned from his post as Tourism Minister, however, he remained on as MP. Keith Schembri resigned from his post as chief of staff to the prime minister. Schembri has been mentioned both by Fenech and Theuma in relation to Caruana Galizia’s murder. He was subsequently arrested however, the police released him without a charge. 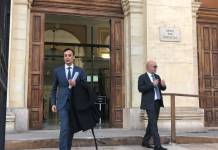 ‘There is no legal or constitutional basis for such appeals and are therefore rejected,’ the statement reads.