A pre-qualification questionnaire of the building, financing, operation and maintenance of the Malta-Gozo tunnel has been issued. Prospective bidders have up to 9 April to file their submissions.

Infrastructure Malta explained that this was the first stage of a three-stage process which will lead to identifying the company or consortium which will be awarded the concession, during a press conference on Thursday morning. The international announcement was made earlier this week through the European Union’s Journal.

Gozo Tunnel: Works on drilling and construction are progressing – Borg

The tunnel which is 14km in length will be partly at subsea level and will include a two vehicle lane, one in each direction. The proposed tunnel structure should be from Xemxija area to Nadur area. 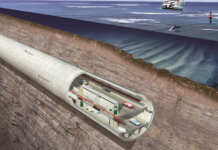 The chosen bidder will eventually operate for a pre-defined number of years, however, the duration of the concession will only be decided at the final stages of the process. At the end of the concession, the operator will be required to transfer the tunnel back to the government.

Details on tolls to be issued at a later stage

The government’s preferred option is one which does not require any guarantees or subsidies but is self-financed. Infrastructure Malta said that the details on tolls or other fees will be issued at a later stage.

The five top ranking bidders of the initial PQQ stage will qualify to the next round and will be invited to participate in a dialogue where they are expected to submit detailed technical plans of the proposed tunnel structure as well as the implementation, operation and maintenance solutions they would adopt if entrusted with the concession. Each participant will be invited to dialogue meetings to explain the proposal to the evaluation team analysing each proposal.

The selection process will be concluded with the Best and Final Offer stage. PQQ shortlisted candidates who would have participated in the ITPD stage will be requested to submit a final proposal for the project. This will include a detailed technical and financial offer based on the solution proposed in the previous stage. The selection team will then identify and recommend the best offer based on pre-established criteria.