Pope Francis called on nations to practise self-control and engage in dialogue as an antidote to the mounting state of crisis between the United States and Iran.

Vatican News reported the Sunday Angelus prayer by Pope Francis who warned against the devastating effects of war. Although he did not point to any country in particular, he referred to the “terrible air of tension” that can be felt in several parts of the world.

Vatican News quoted Pope Francis who urged “all parties to fan the flame of dialogue and self-control, and to banish the shadow of enmity”.

The Pope then asked everyone to be silent and pray for this much needed cause. 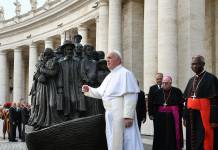 Mounting tensions between US and Iran

The Pope’s appeal, according to the Vatican News portal, is very much in line with what the world is currently going through, especially in light of the mounting tensions between the United States and Iran.

The Vatican News also mentioned the US airstrike, which led to the death of a top Iranian general in Iraq. General Qassem Soleimani was the commander of the Quds Force, the wing of the Islamic Revolutionary Guard Corps responsible for military activities outside Iran. His death on Friday in Baghdad raised the threat of direct confrontation between the US and Iran.

The input from an Eastern Catholic Church

Pope Francis was not the only one to voice his concern in this regard. The same news portal quoted the Patriarch of the Chaldean Catholic Church, Cardinal Louis Rafaël Sako who on Saturday expressed the Iraqi people’s shock at the event:

“It is deplorable that our country should be transformed into a place where scores are settled, rather than being a sovereign nation, capable of protecting its own land, its own wealth, its own citizens.”

Additionally, according to the Vatican News, the Cardinal appealed for all nations to unite in exercising moderation, acting reasonably, and sitting down in an effort to reach understanding.

Coronavirus and COVID-19: Fact versus fiction