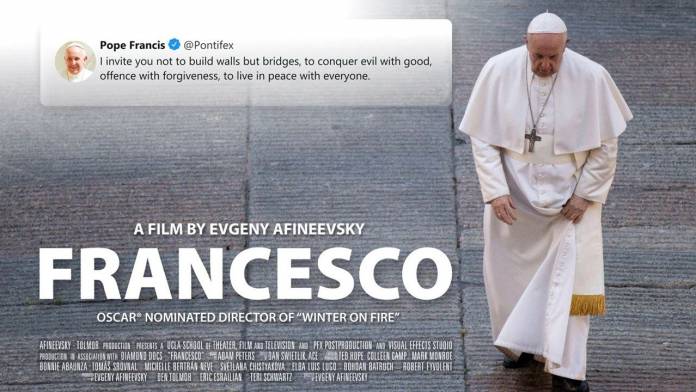 Pope Francis has indicated his support for same-sex civil unions in a new documentary directed directed by Evgeny Afineevsky, various international media outlets have reported. The documentary was premiered in Rome on Wednesday.

Reflecting on the status of individuals who identify themselves as part of the LGBTIQ community and their role in the Church, Pope Francis is quoted saying “homosexual people have a right to be in a family” to which he added that they are children of God and that nobody should be thrown out or made miserable over it.

Vatican News made no mention of the news in its report on the screening of the documentary.

In a detailed feature by RomeReports, it was reported that the Pope specified that he had already spoken out on the issue when he was Archbishop of Buenos Aires, Argentina. At the time he had opposed a law proposing same sex marriage but had supported extending legal protection afforded to same sex couples in different matters including inheritance and accessibility to medical care.

Pope Francis had also spoken out in favour of civil unions when he was still a cardinal however this is the first pronouncement on the subject he has ever made since he became a Pope.

“Francesco” – a documentary on the life and teachings of the Pope

In the documentary, Pope Francis addresses issues like migration, racism, the pandemic and climate change.

The film was premiered for the first time on Wednesday afternoon as part of the Rome Film Festival.

On Thursday, Afineevsky will be presented in the Vatican Gardens with the prestigious Kineo Movie for Humanity Award, which recognizes filmmakers who present social and humanitarian issues through filmmaking. The award was established in 2002 by the Italian Ministry of Culture.

Rosetta Sannelli, the creator of the Kineo Awards, noted that “every trip of Pope Francis to various parts of the world is documented in Afineevsky’s work, in images and news footage, and reveals itself as an authentic glimpse into the events of our time, a historical work in all respects.”

Fly me to the moon: Japanese billionaire Maezawa seeks girlfriend for SpaceX voyage