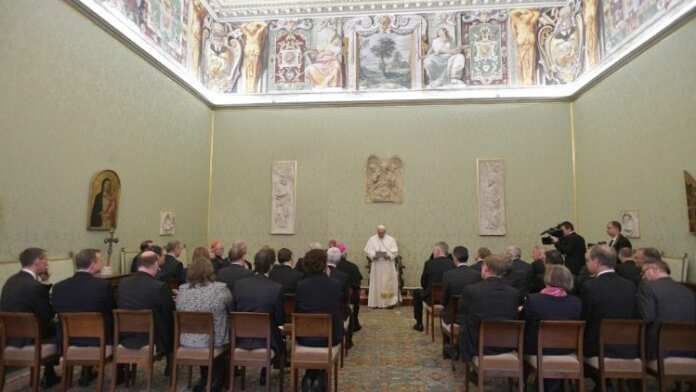 Pope Francis during an address to German journalists in the Vatican on Thursday, stresses the importance of factual reporting, dialogue and the dignity of the human person.

In his address to the delegation of Catholic, and Evangelical journalists and public service broadcasters, Pope Francis focused his attention on three key points.

The first of those was dialogue and the Pope praised, what he called “the living dialogue between the Churches and public broadcasting in Germany. He added, that this “dialogue generates understanding, opens up horizons, and it finds itself creating space for a free and open exchange of information, opinions and analysis.”

The Pope’s second point dealt with the issue of factual reporting and he encouraged the delegation in their efforts “to ensure that there are facts instead of fake news, objectivity instead of rumours, precise research instead of approximate titles.”

Turning to his third point which focused on the dignity of the human person, Pope Francis said, “For some time now we have been witnessing a worrying evolution in the world: the challenge of the right to life, the advance of euthanasia, the denial of social equality, the lack of integration, the violation of human dignity and freedom of conscience.”

In this context, the Pontiff continued, “public media has a responsibility to take a firm stand for the precious good of human freedom. “He underlined that the Churches supported them in this service, “since they are entrusted with the mission of Christ…”

Concluding his address, the Pope noted that as journalists, they placed people at the centre of their attention, and he expressed the hope that their reporting would never lack the many good news stories that are worth telling and that give people hope.

MEA says not all sectors are affected to the same extent; appeals for continuous dialogue

Patriarch Sako hopes Iraq will not become a war zone

Peace as a Journey of Hope: Dialogue, Reconciliation and Ecological Conversion

Pope says society needs to move “in step” with the elderly