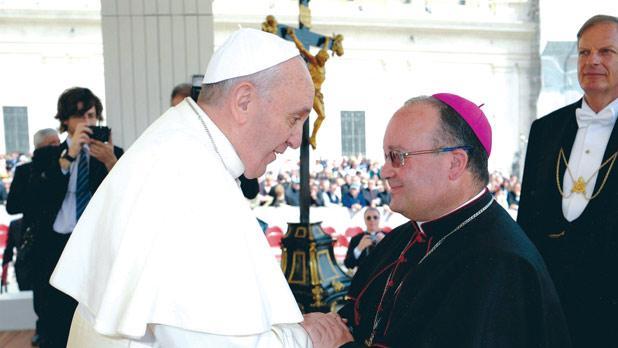 Pope Francis and Archbishop Charles Scicluna  on Thursday discussed, among other things, the situation in Malta following the murder of immigrant Lassana Cisse in Hal Far in April. At the end of the meeting the Pope sent his blessing to the Maltese people.

Pope Francis reminded the Archbishop of St Paul’s Shipwreck in Malta and the welcome he was given by the Maltese. Francis, who has over and over again, condemned all forms of xenophobia and other negative reactions towards migrants, said that a lot of good happens when migrants are welcomed.

The Archbishop updated Pope Francis on the reaction of the Church to the murder of Lassana. He informed the Pope of the Good Neighbourhood Dinner that is being organized to foster a good feel factor between different sectors of our society and the migrant population.

In a comment to Newsbook.com.mt Archbishop Scicluna said that the ‘A Good Neighbourhood Dinner’, would bring together 30 youths and 30 immigrants to eat and discuss together. The Dinner will be held the coming Tuesday. He described this activity as an opportunity for youths to interact and learn to live together.

Watch: Maltese youths and immigrants share a meal at the Archbishop’s Curia

Read: Half of the proceeds of the Archbishop’s concert will go to Cisse’s family

“They are not our enemies”

He also informed the Pope of the Pentecost Pastoral letter that the Archbishop and Auxiliary Bishop Joseph Galea-Curmi published this weekend. In this Pastoral Letter the bishops are appealing to Maltese people to change their attitudes about foreigners and to not to see them as, ‘our enemies’.

‘People coming to live among us looking for a better life are not our enemies but become a part of our prosperity and cultural heritage. Foreigners living in our country are human beings like us who have the same human dignity and the same fundamental rights we enjoy.’

Mgr Scicluna informed the Pope that when he administers the sacrament of confirmation he gives the adolescents the name of Francesco or Francesca to help them remember the Pope and his mission in the Church.

Polish meeting on the agenda?

The Catholic news website Crux in an in-depth article about Archbishop Scicluna’s lecture to be delivered to the Polish bishops on June 14 said that it is not known whether that visit, made at the request of the Polish bishops, was on the agenda of the Archbishop’s meeting with the Pope.