Former Prime Minister Joseph Muscat, in a brief statement to journalists said that he had answered all questions put to him by the police. He said that the police spoke to him on matters which had already been raised in the media. However, he did not specify the issues discussed. The statement was made outside the Police HQ in Floriana Friday afternoon, shortly after the media broke the story that he was to be interrogated.

Sources have indicated to Newsbook.com.mt that Muscat was called to the police headquarters in connection to information related to the murder of Daphne Caruana Galizia. 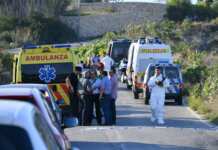 The same sources told Newsbook.com.mt said that it was possible that he would be cautioned that whatever he was to say, would be used in the case.

Legal experts have explained that when a person is asked to go to the Depot for questioning, the caution is normally read out to remind the person of his rights including that not to incriminate oneself. The same experts said that this person would be of interest to the police but would still not be under arrest, at that point.

Times of Malta reports that the interrogation is about claims made by Yorgen Fenech, accused of complicity in Daphne Caruana Galizia’s murder, that Muscat asked him whether his Chief of Staff Keith Schembri featured in Melvin Theuma’s recordings. Fenech told police that he assured Muscat he was looking out for Schembri.

MaltaToday then reports that Fenech told police he discussed Melvin Theuma with Joseph Muscat twice in 2019, once at Muscat’s infamous birthday party in Girgenti, and another time during a meeting with Muscat and Schembri in Castille.