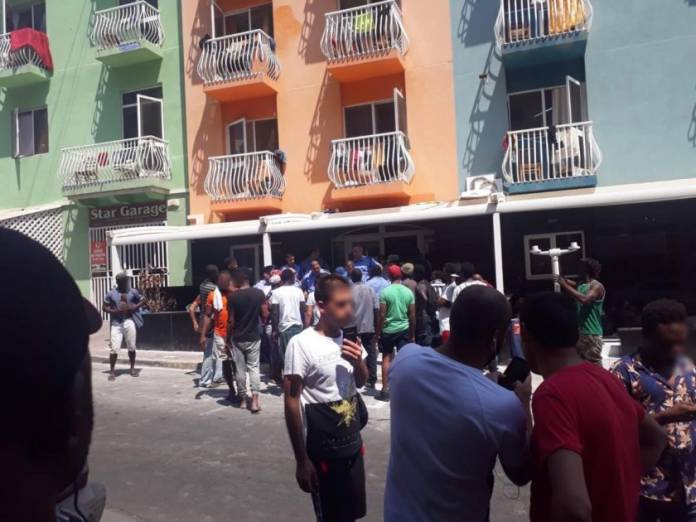 People who live at the former Paloma Hotel would be worst off if the health authorities were to close the premises, a lawyer argued in court on Monday. He described the raid by the police as a PR stunt to show that action is being taken.

The police carried out a raid at dawn on August 26, accompanied by the health authorities. The migrants later returned to their apartments after a court provisionally upheld a request for an injunction requested by landlord Christopher Drago (who is appearing on behalf of the owner of the hotel).

Lawyer Edward Gatt, who is appearing for the landlord, described the raid as a “PR stunt” and a “Fantozzata” (referring to the Italian character Fantozzi). He stated that he does not believe in coincidence, pointing out that the raid came after some 350 migrants were brought ashore. He added that this action sent the message that not only Malta is rescuing migrants, but it is also keeping control.

The people were whisked away in buses and taken to the Police Headquarters, only to be released within hours as their documentation was found to be in place.

READ: “They committed no crime; they were too poor to afford decent accommodation”

Gatt argued that the health authorities could have easily ordered the landlord to effect the changes they saw necessary to the premises without sealing it off. Adding that if one leases a room to a tenant, the landlord is not responsible for its up keeping.

“If you rent a room for €100 a month, you don’t expect a presidential suite at Hilton,” Gatt argued, saying that the fuss made about people living inside rundown premises was not his client’s problem, but a national problem.

Gatt argued that his client has the right to enjoy his property, a right which is enshrined in the Constitution and the European Convention on Human Rights. He also added that his client was likely to suffer greater prejudice if the injunction was not upheld. Gatt said that a person would starve to death by the time he has his rights confirmed by the courts.

Gatt questioned whether it was reasonable to enter the place with chains to seal off the former hotel and knock down the doors to the apartments. He added that ‘a simple knock on the door would have sufficed.’

Describing the measure as ‘draconian’, Gatt said that while the action might be popular in the eyes of the public, it would leave some 120 people homeless.

The lawyer warned that if the injunction is not upheld, migrants including children would end up on the street. Adding that it will be more detrimental to the tenants than his client. He observed that no one told the tenants, ‘you’re living in squalor here, am going to offer you alternative accommodation.’

A copy of the works carried out by the landlord in the period between the raid and the first hearing was presented in court.

Lawyer Dustin Camilleri and Alexia Farrugia Zrinzo appearing for the health authorities countered the argument saying that the Superintendent of Public Health had the legal authority to take action.

Citing the law, Camilleri pointed out that the Superintendent must take action and seal off the premises if there is a public health emergency. He added that this is done not only to protect those living inside, but also the surrounding community.

Camilleri added that the crux of the matter is “public health emergency” as identified in the law. He added that the Superintendence will not go into the details of the contract between the tenants and the landlord, saying this would require a different course of action.

“It is a pity that they have nowhere to go to,” Camilleri said referring to the tenants. Adding that inhibitory injunction could not be used in such a situation.

Neighbours filed their reports with the health authorities which prompted action on the property, it later emerged in court.

Mr Justice Francesco Depasquale put off the case to Tuesday for a decision on the confirmation or otherwise of the injunction.