Police officers on Gozo spent days in the dark after they came into a contact with a person who had died and tested positive for coronavirus postmortem. The man was found dead in his home in Nadur.

Various sources have confirmed the news with Newsbook.com.mt, however, the death was not include in Health Ministry’s daily death tally for coronavirus.

Earlier on Thursday, a police spokesperson told this newsroom that all officers who were exposed to risk have tested negative for the virus.

Relatives of the officers in question have told this newsroom, that the police officers were asked to take a swab test however were called in to work pending their results. Police officers are not entitled to quarantine leave unless the health authorities place them in mandatory quarantine, leaving the officers with no other option than return to work.

A medical team from the Gozo General Hospital who was called on site was also exposed to risk.

Newsbook.com.mt reached out to Steward Health Care, the American company running the hospital on the sister island, about the case. While the spokesperson was not in a position to confirm the case as this information would be published by the relevant authorities, the spokesperson explained the various measures in place to minimise the risks and safeguard the health of their employees.

Employees were full personal protective equipment when assisting with transferring a corpse to the morgue. Hospital staff is regularly screened for Covid-19. Other measures include regular fumigation of the morgue even after the coffin is sealed. Corpses of people who died and were found positive for coronavirus are placed inside two body bags. All the measures which are taken are in line with the guidelines and protocols issued by the health authorities.

The spokesperson also said that there were no coronavirus-related deaths registered at the Gozo General Hospital over the past days.

A spokesperson for the Malta Police Force told this newsroom that the officers who were on site when the man was found dead were wearing the necessary protective equipment including face masks and gloves. The case was referred to the Environmental Health Directorate. The officers involved were not officially instructed to go in quarantine, the spokesperson noted, before adding that the swab tests carried out on the officers returned negative.

Newsbook.com.mt has also sent questions to the Ministry of Health which remained unanswered until the time of writing.

At the start of this pandemic, ten new ventilators were added to the 15 existing ventilators at the Gozo General Hospital. 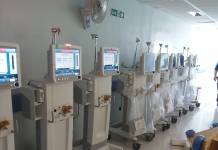