Sliema District Police together with officers from the Major Crimes Unit stopped a car that was being driven with clamps attached. The driver was without a licence. The car was not insured and one of the registration plates was missing.

Another of four individuals were found driving under the influence of alcohol during a roadblock in Żejtun. Another driver refused to take a breathalyser test.

Substances believed to be cocaine was found on one of the passengers. Investigations on this case are still ongoing.

Further road inspections were carried out this morning. In a combined effort between various sections 40 fines were issued at Triq il-Kosta, Baħar iċ-Ċagħaq. Amongst the fines 10 were related to vehicle noise levels. The rest of the contraventions include not wearing a seatbelt, vehicles without a licence and vehicles without registration plates. 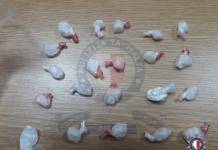