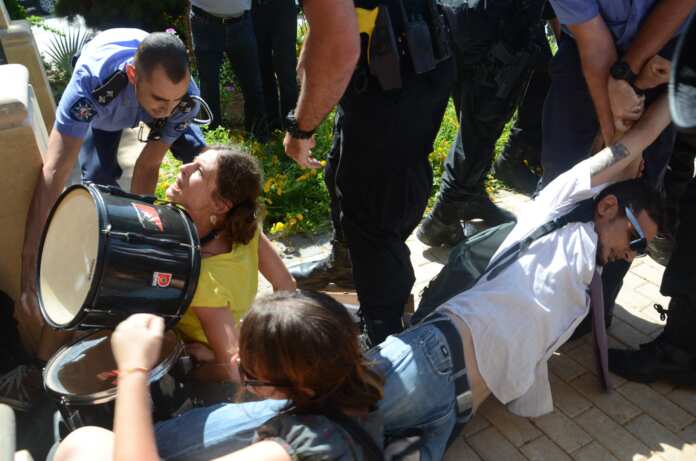 The Police have confirmed that the RIU are being investigated regarding the excessive force used by the Police on the activists protesting outside the Planning Authority on 13 September. However, the spokespersons for the Police said that at this stage, it would not be prudent to provide more details.

Yesterday, activists from Moviment Graffiti and Kamp Emerġenza Ambjent protested against the proposed fuel station at Żejtun which would have seen agricultural land taken up. These activists were dragged out by the Police, and it appears that they suffered some injuries.

The Malta Police Association (MPA) said that Prime Minister Joseph Muscat’s comments were unfounded at the time of them being said, as they caused more harm when details are still fuzzy as yet.

MPA went on to say that it does not appear that the Police used excessive force. In the press release, they detailed that the activists were firstly asked to leave, but refused to.

The Association concluded by inquiring about politicians’ stands on the matter, asking whether they think the Police should be doormats for anyone who comes along.

Christoph Schwaiger   April 3, 2020
A national pilgrimage will be organised on the 14th of September if the authorities give the green light for religious gatherings to take place, according to Archbishop Charles Scicluna.

Sephora Francalanza   April 5, 2020
The Air Malta cabin crew has spoken out after several employees were emailed by the company, to be informed that their employment will be terminated by the end of March.

Reuters   April 3, 2020
New York state braced for an onslaught of new COVID-19 cases next week after recording more than 500 deaths in a single day, bringing the total to nearly 3,000, or about the same number killed in the United States in the Sept. 11, 2001, attacks.