Angelo Gafà will be Malta’s next police chief after MPs within the Public Appointments Committee voted to approve him.

Gafà was the first police chief to be chosen by the government through the new process approved earlier this year. But the PN chose to boycott the grilling after deeming the process to be a sham, since it still effectively left the choice of police chief in the government’s hands.

In a statement released in the midst of the grilling, the PN reiterated that it would not participate in a ‘farcical’ process so as not to lend legitimacy to it.

In a statement, Home Affairs Minister Byron Camilleri welcomed the first appointment of a police commissioner through the new system adopted earlier this year, stating that this improvement had been recognised by the Council of Europe’s Venice Commission.

“This is one of the main changes that our country has implemented in the first few months of the year to send a clear message that its politicians were willing to forego powers that had always been exclusively theirs,” he said. 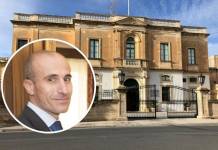 "And you're stuck with these officers for 25 years or more, as the best ones often leave for better posts in the private sector."
John Paul Cardona
15:30 Though education was not everything, it was essential, Gafà states.
John Paul Cardona
15:29 Bedingfield asks on recruitment, and Gafà notes that he had disagreed with the lowering of educational qualifications required to join the force. For the last call, which ended last week, the requirements were increased again.
John Paul Cardona
15:27 Police officers, he says, should start in a general position before specialising – save exceptions for recruits qualified in certain key areas.

Those who wish to specialise must prove that they are motivated to work in the field they seek, Gafà says, including through online self-assessment which would not cost the police force a single cent.
John Paul Cardona
15:26 Agius Decelis asks whether there would be clear criteria on how police officers would be chosen for promotion, but Gafà states that this would be part of the strategy he pledged to publish.
John Paul Cardona
15:25 Gafà argues for the need to improve meritocracy within the police force. Police officers' abilities should be better assessed to assign the best people to each task.
John Paul Cardona
15:20 Gafà notes that a lot of hate speech took place online, which created a problem for a police force which worked according to districts.

He states that there was the need for a specialised unit to deal with hate crimes. The Cyber Crime Unit is also scheduled to be strengthened, Gafa states, giving it the second-highest priority after Economic Crimes.
John Paul Cardona
15:20 Bartolo asks about cyber bullying and hate crimes – including racism.
John Paul Cardona
15:18 Gafà agress that more press briefings should be needed, highlighting that as police commissioner, he understood that he would be expected to give some of them.
John Paul Cardona
15:16 But the police force needed to play its part and improve at delivering information, thus reducing the need for journalists to seek sources.
John Paul Cardona
15:15 Gafà insists that this was wrong, on multiple levels. As a police officer, he says, he never leaked information, and as commissioner, he would seek to put an end to such leaks.
John Paul Cardona
15:14 As a former Labour Party journalist, Bedingfield highlights that obtaining information from police was a frustrating process. Whenever information was needed, he says, it was always far easier to obtain unofficially through sources.
John Paul Cardona
15:13 The police's call for tender seeks bodycams which switch on automatically whenever weapons – lethal or otherwise – are deployed. Gafà points out that when bodycams could be switched off, they were generally switched off during the most crucial moments.
John Paul Cardona
15:11 He acknowledges that police officers were resisting the introduction of bodycams, but argues that bodycams also worked in their favour, as allegations of misconduct tended to fall once there was clear evidence of what had happened.
John Paul Cardona
15:10 Gafà also notes that a process to acquire bodycams – which, he points out, would increase accountability. is ongoing.
John Paul Cardona
15:09 Gafà also suggests that the police uniform may be updated, in part to adapt it to Malta's climate. But it could also help to bring the force closer to the people.
John Paul Cardona
15:08 He moves on to non-financial aspects, noting how many police stations were not built for this purpose. He also reveals that many were leased years ago under protected leases, which are increasingly being challenged and struck down in court.
John Paul Cardona
15:07 He states that he is never completely happy with police working conditions, though he does argue the situation has improved.
John Paul Cardona
15:05 Gafà notes that the first thing that came to mind was financial considerations. He recounts The police used to work 46 hours a week and get paid for 40, until a sectoral agreement reduced their work week to 40 hours.

The rate still remained beneath the EU average, however, and trust fell to 59% in 2019.
John Paul Cardona
14:12 He notes that people may feel that the drop in reported crime may be due to a loss of faith in the police force, but disputes this.