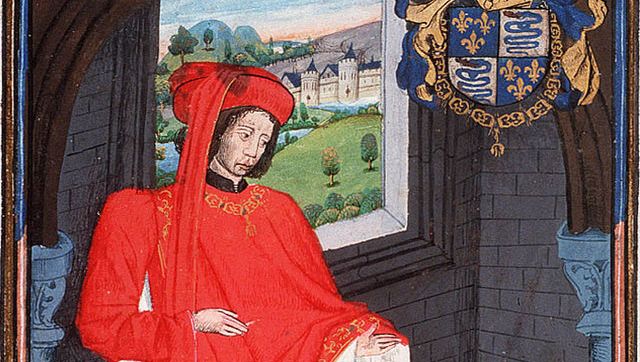 Previous part
The Poet King in the Tower 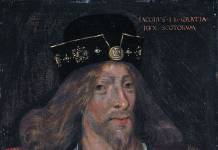 The second royal poet in this story was born in the same year as James I of Scotland. Charles was born into the royal Valois House of France. He was born in Paris on 24 November 1394, the eldest surviving son of Louis Duke of Orléans, (1372-1407) younger brother of King Charles VI of France. Charles was half-Italian since his mother Valentina Visconti (1371-1408) was a daughter of Gian Galeazzo I, Lord of Milan and later first Duke. Charles had three elder brothers, the first of whom first died at birth 1390. The third one died aged 2 months in 1393 while the second brother died in 1395 aged 4 years. Two younger brothers lived to reach adulthood and the youngest siblings were two girls one of who lived for only a day. Half the children died young which shows that even in the highest circles infant mortality was very high. It also accounts for then often great haste in which royal children were made to marry very young.

At the age of just a year, Charles became his father’s heir and was soon pushed into a position of a certain responsibility which would daunt a modern young man of his age. France at the end of the 14th century was going through a peaceful phase with England. The countries had been at each other’s throats on an off since the outbreak of the so-called Hundred Years War. In 1396 King Richard II of England had taken as his second wife Isabelle (1389-1409) de Valois daughter of King Charles VI and thus the first cousin to Charles of Orléans. As was customary at the time, child brides would have to wait to reach adolescence before marriage was consummated. This was never the case with Isabelle because in 1399 Richard II was deposed by his cousin Henry of Lancaster who usurped the crown as Henry IV. The latter wanted to keep Isabelle in England so he could marry her off to his heir the future Henry V. The young girl proved very wilful and from 1400 insisted on wearing mourning for Richard. It was only in 1401 that Henry allowed her to leave for France but kept her dowry, which was contrary to custom where childless widows were concerned.

Meanwhile, things were becoming very serious at the French Court. The king first showed signs of mental instability in 1392 and Louis of Orléans, as the King’s younger brother started playing a very important role in the running of the country, which he did together with the Queen, Isabelle of Bavaria. As the years passed the collaboration was very close, some hinted even a little bit too close, but this was food for gossip mongers especially, the King’s powerful cousin the Duke of Burgundy who vied with the couple for control. Burgundy managed to obtain a royal injunction granting him custody of the royal children. The two Dukes became bitter enemies and there was back and forth kidnapping of the Children of France and Orléans.  Civil war almost broke out between the two factions until a formal reconciliation between the Dukes took place. However, just a day later fifteen hired assassins openly cut down Louis in a Parisian street.  That was in November 1407 and Charles became Duke of Orléans. It was his baptism of blood but well before this tragic event, his road to adulthood had been accelerated by marriage in June 1406 with the widowed but presumably still nubile Isabelle de France. She was 16 and her husband 11 years old.  Matters took their course and in September 1409 Isabelle died in childbirth. Charles became a father when still 14 and his daughter Jeanne eventually married a cousin, the Duke of Alençon. She died childless in 1432 without ever seeing her father who after 1415 was a captive in England. The young widower married again in 1410. His wife Bonne was the daughter of the Count of Armagnac, a great supporter of the Orléans faction. It was because of this that during the running feud with the Burgundian party Charles’s faction became known as Armagnacs. Charles second marriage produced no children.  She too was never to see her husband again because she died sometime between 1430 and 1435.

One could already gather at this point that Charles’s captivity in England was a long one. This was a consequence of the massive French defeat at Henry V’s hands at Agincourt in October 1415. The flower of the French nobility was more than decimated. Charles escaped with his life because he was found still alive under a heap of corpses. His capture made of him a great prize for the English and as long as the English and their Burgundian allies had the upper hand few thought about the matter of raising a hefty ransom to free the Duke of Orléans. With James, I of Scotland being frequently moved to and from the Tower of London, and even campaigning in France with Henry V, and Charles being moved from the Tower to other castles, it is probably unlikely but not impossible that Charles and James were in the Tower at the same time.  One castle where Charles was lodged was Pontefract Castle in Yorkshire. Rather ominous as it was there that the deposed Richard II was reportedly starved to death in 1400. Charles was a valuable pawn and as long as the Burgundian alliance held both Henry V and the Regents for his some Henry VI ever considered raising a ransom.

What is certain is that over the years of his captivity Charles displayed great talent as a poet. Every now and then a French royal prince distinguished himself in this art. Jean Duke of Berry (d.1416), a younger son of King Jean II comes to mind. He was great-uncle to Charles and another poet René d’Anjou, briefly, King of Naples was a close relative.

The poems Charles wrote were in French and English. He even ended up speaking more English than French and because of his English poems, he is considered as an “English” poet. He wrote his poems in the ballade and rondeau styles.

Many of them reflect thoughts and musings about his captivity. He was the last and one of the greatest French poets of courtly love. He is also credited with having written the first Valentine poems, dedicated to his second wife whom he was never to see again.

It was only with the peace of Arras in 1435 that Burgundians and Armagnacs stopped their feuding. The former withdrew from their English alliance. Duke John had been assassinated in 1419 and his son Philip the Good of Burgundy made Charles promise not to seek revenge for his father’s murder in 1407. Charles agreed but it took another five years before Charles was allowed to return to France in 1440. He married his third wife Marie of Cleves (1426-87) a German princess whose mother was also a Burgundian princess.  They got married in November 1440 when she was 14 and he was 46. They had three children. A daughter Marie (1457-93) Countess of Étampes, in 1462 a son who became King Louis XII of France when his second cousin once removed Charles VIII died without heirs in 1498 and reigned until 1515. When 70 Charles’s youngest child was born, Anne Abbess of Fontevrault and Poitiers. Charles died on 4 January 1465.

The Poet King in the Tower