Adrian Delia stated that the PN now does not need change, does not need reforms but needs a revolutionary change. “Those who have the interest of the party at their heart do not meet in secret to come up with strategies,” said PN Leader Adrian Delia.

Sunday morning Adrian Delia started his speech in Mellieha by praising the work of Robert Arrigo who expressed his intent to resign from deputy leader and Clyde Puli who submitted his resignation from PN Secretary-General last Friday.

He said that the PN’s doors are open and will remain open but not to those few who want to make the PN their own party and if this happens nothing would have changed. By stating this Adrian Delia admits that there 17 MPs who want him to step down. 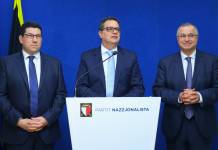 “We are obliged that at this particular moment it is the time to search our souls and decided what to give to this party and not what to take away from it,” said Delia.

Adrian Delia then said that the first step would be to acknowledge mistakes including himself and appealed to party supporters to question what they can do to help the PN regain its force and not think how to continue destroying it.

“As from today, each and every one of you needs to decide if you want to stay or else leave the party. Those who have a problem working with me as PN leader and as leader of the Opposition then they must leave. These people have a problem with how to understand how politics is done.” – Adrian Delia

Sunday’s political activity was overshadowed by the latest controversy in the PN. On Saturday, the Nationalist Party’s sectional committee in Mellieħa urged Adrian Delia to postpone the political activity planned at the locality’s PN club. The committee made clear, in a statement, that at no point did it decide not to allow Delia to enter the Mellieħa PN club tomorrow. 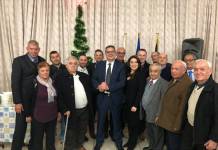 Last Friday, during an interview on Xarabank, as he was reacting to the latest development on the PN leadership crisis, PN leader Adrian Delia stated that no one tells him if he should resign or not.

In just a few days, Adrian Delia has faced a barrage of criticism by 17 PN MPs who want him out. He has also been faced with the resignation of Secretary-General Clyde Puli, Deputy Leader Robert Arrigo showed his intention to resign and the resignation of the President of the PN General Council, Kristy Debono. Also, last Thursday, in a letter, Louis Galea, who is responsible from the party reforms, said that he will ask the President of the PN Executive Committee, Alex Perici Calascione, to make sure that the PN Executive takes all measures to form a new leadership team. 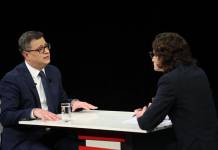