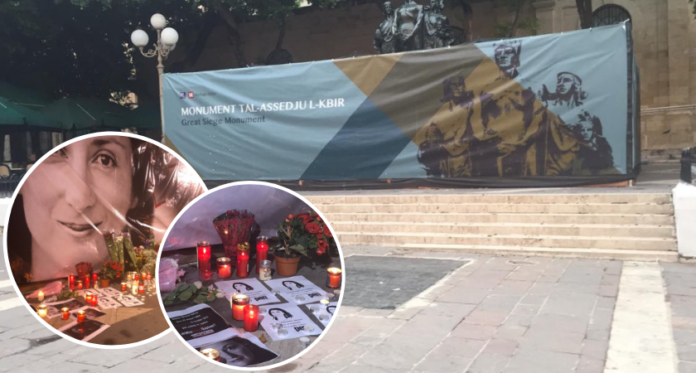 PN MP Karol Aquilina testified in Court this morning regarding items he had personally bought which were removed from the Great Siege Monument turned Daphne Caruana Galizia memorial in Valletta.

Anne Demarco was testifying in the Constitutional Case opened by Manuel Delia against the Government about the alleged breach of fundamental human rights of freedom of expression. This after candles, flowers and banners were removed from the Great Siege Monument opposite the Courts in Valletta as a sign of protest after the assassination of journalist Daphne Caruana Galizia were repeatedly removed. She also spoke about a laurel tree that was planted in the soil at the monument’s base.

During her testimony, Demarco said that she visits the monument at least twice a day to place candles and flowers. She said that before the 8th December, when the area was closed off for restoration, the objects left as a sign of respect to Caruana Galizia used to be left there for around a month. After that day, the items were being removed mere hours after they were placed there.

Member of Parliament Karol Aquilina also testified in Court explaining that there were items which he bought and placed in front of the monument in March which disappeared. He explained that eventually the people responsible for their removal were identified, but no steps were taken against them.

Among the witnesses, there was Newsbook.com.mt journalist Christoph Schwaiger who spoke about how, on the 15th September, he was stopped from doing his job of filming public sanitation workers removing banners from the barriers around the monument. He explained how the officials took hold of his arm and his mobile phone to stop filming. He also said that the incident was concluded without violence.

The case will continue in February.