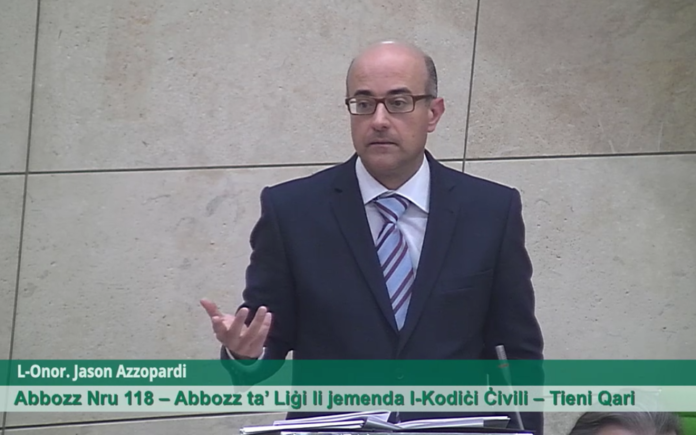 PN MP Jason Azzopardi proposed that a Magistrate be appointed by the President with the sole job of investigating, fighting, and leading eventual corruption cases with the power to start them off himself without leaning on the Police.

This was said during Azzopardi’s adjournment speech in Parliament. He said that it was Chief Justice Emeritus Vincent Degaetano who recently called the authorities’ attention to the fact that an inquiring magistrate currently depends on the Police, while at the same time keeping up with many other inquiries, hundred of district cases, compilations, and being a duty magistrate among others.

Azzopardi said that the need for an inquiring Magistrate is obvious considering that the “corrupt” Vitals Global Health Care contract of €2 billion, did not lead to any investigation. He also went into the details of the concerned case during his intervention, mentioning that the company was handed the contract despite their apparent lack of experience in the health sector.

He also spoke about worrying facts about the contract, which would not have been public knowledge if not for independent media. Azzopardi said that these facts suggest that Ministers Konrad Mizzi, Chris Cardona, and Edward Scicluna, among others, committed or were complicit in fraud, corruption, breaking professional secret, bankruptcy fraud, trading in influence and conspiracy.

VGH ‘absolutely no experience anywhere in the world with regards to the health sector.’

It is understood that VGH would have been awarded a 30 year concession to operate the Karin Grech, Gozo General and St Luke’s Hospital in 2015. This could be extended to 99 years. Had this deal been successful, VGH would have received €70 million for the operation of the hospitals, €1.2 million funding towards a medical school in Gozo, and an air-ambulance of €1 million a year.

Dr Azzopardi supplemented this information with further allegations made during the week regarding VGH’s attempt to sell cancer medication thanks to its acquisition of the pharmaceutical company Mtrace plc. This also comes as last week the Shift News uncovered that Vitals Global Health Care had secretly bought the medical supplier Technoline, which had exclusivity rights over Maltese hospitals. This, he states was VGH using money received from the government to acquire companies that would grant them exclusivity on medical products at low prices.

He also stated that the fact that the deal ‘set up to fail’ combined with the knowledge that the company was bought by Steward Healthcare for €1, and the filtering of a large amount the €7 billion for a 99 year contract, into secret companies, was enough to incriminate.

Given their knowledge of the situation and suggestions of insider-trading, that would implicate Tourism Minister Konrad Mizzi, Mr Vassallo, VGH CEO Armin Ernst, VGH President Ram Tumuluri, Chris Cardona, Edward Scicluna, among a number of others involved in the deal.