Partit Nazzjonalista executive committee will start discussing structural and organisational reform proposals on Saturday. The announcement was made by newly-appointed Secretary General Francis Zammit Dimech during a meeting with sectional committee officials on Friday.

In a statement Partit Nazzjonalista said that Zammit Dimech held his first meeting with the officials since his appointment. Local presidents, secretaries and treasurers of the Nationalist committees were present for this meeting held at the party headquarters.

Five council assemblies are planned over the coming weeks, as the executive committee discusses the reform proposals, Zammit Dimech told party officials. The assemblies will have the opportunity to discuss the proposals before these are discussed within the General Council, or the highest organ of the party.

The newly-appointed Secretary General thanked his predecessor and acknowledged that the party was passing through challenging times. Despite the challenges, this could be an opportunity to emerge as a strong and effective Opposition, Zammit Dimech said.

“This process gives us a chance to rediscover our vocation of serving the country,” he said. The party veteran said that he was determined and full of energy to bring about the necessary change. He urged all those involved in the party to put in effort and dedication towards the party.

Constitutional reform discussed in meeting between Repubblika and Zammit Dimech 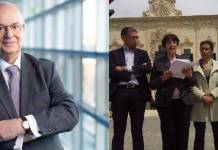 A similar meeting is planned for Gozo in the coming days.