Prime Minister Robert Abela has just arrived in Gozo, after having sailed to Comino.

Numerous amounts of people were waiting expectantly for his arrival. The Prime Minister is to visit the Labour Party Clubs in Xewkija, Xagħra and Qala.

Abela has stated his love for the sea numerous times. He took the helm, guiding the boat towards Comino, and then Gozo.

His first official visit to Gozo as Prime Minister was just last week, where he gave a speech in Rabat. 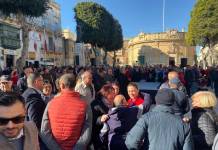 Coryse Borg   February 18, 2020
The 2020 edition of the Maltese Islands Festival of Drama, Dance, Music, and Singing will take place from 4 to 8 March 2020 at Spazju Kreattiv, Valletta, and the Phoenicia Ballroom in Floriana, and the public is welcome to attend.