Daphne Caruana Galizia was killed a year ago at 3pm in a car bomb. It is still unknown who ordered the murder and many are those who are still demanding justice.

The government is committed to serve justice

The Maltese Government declared its commitment to serve justice for assassination that “violence that does not make sense”. The Government said that there are three individuals under arrest that are being accuse of the journalist’s murder and is confident that all those that had something to do with this heinous crime will be prosecuted accordingly as it will continue to support the Police Force and the Magistrates i their investigations.

The Government also showed solidarity with Caruana Galizia’s family and stressed that it will continue to pursue the entitlement for human rights, freedom of speech, the protection of those pursuing the journalistic profession as well as the rule of law In Malta.

“A year later the Maltese are still waiting” – Delia

In a Facebook Partit Nazzjonalista and Opposition leader Adrian Delia said that the public is still waiting for justice a year on from the murder of the investigative journalist. He also attached a picture describing the journalist as a “mother, daughter, woman and journalist.”

“A threat to the rights of the citizen” – PN 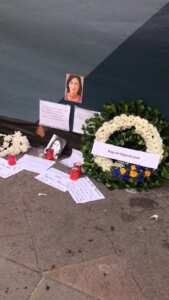 Partit Nazzjonalista said that the assassination of Daphne Caruana Galizia is a grievous threat towards the rights of the citizen in terms of freedom of expression, protection for those pursuing the journalistic profession and the rule of law in our country. The PN also states that this murder impacted greatly on the democratic mechanisms and the reputation of the country and is urging for an autonomous and independent investigation to establish what kind of action had been taken by the authorities to protect the journalist and if such a tragedy could have been avoided.

Moments of silence from the President

Malta President Marie-Louise Coleiro Preca asked for some moments of silence before the inaugural speech for the Conference for the President’s Foundation for the Wellbeing of Society on Tuesday morning. She asks all those present to remember the atrocity of the murder and remarked that such an episode should be a reminder to continue the fight for freedom of speech.

“Truth cannot be killed off” – PD

In a press release to mark the anniversary of the assassination of Daphne Caruana Galizia Partit Demokratiku said that the truth can never be killed off and asked for a public and independent inquiry as they believe that the Government has failed to honour is obligations to find those that planned the murder.

PD states that both the Government and the leader of the opposition are responsible as they have created a political climate that weakened Caruana Galizia and led to her opportune demise.

Daphne we have not forgotten you and we will not forget. One year after the killing of #DaphneCaruanaGalizia the European Parliament is still calling loud for justice to be done. #JusticeForDaphne pic.twitter.com/p1hlQROdmZ

Minute of silence at the European Commission

The European Commission honoured Daphne Caruana Galizia, Jan Kuciak and others that were killed because of their investigations with a minute of silence.

Today marks one year since the assassination of Daphne Caruana Galizia.
We honour the relentlessness of Daphne, of Jan Kuciak and many other journalists with a minute of silence. pic.twitter.com/C0VkGm0MO6