Mensija residents are alarmed at plans to develop a road in the vicinity of the hamlet’s historic sanctuary, believing the developers behind it to propose the road as a prelude to further development months after plans for a sizeable complex were rejected.

Objectors include the Church in Malta, with the Interdiocesan Environment Commission stating that it strongly recommended the refusal of a permit.

Last year, developers proposed the “demolition of existing dilapidated structures, proposed site excavation and construction of underlying parking levels, a Class 4A Office, duplex residential units with gardens and pools and overlying residential apartments including a receded floor” on a site that lies just next to Mensija’s only geological sinkhole. The sinkhole lies behind the Mensija sanctuary, itself built over a cave, and was declared to be a protected site by the Environment and Resources Authority last November. 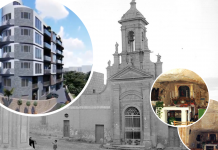 The project itself was recommended for refusal, and last December, the PA accordingly refused to issue a permit. The decision was not appealed, but the site’s owners have since filed for a Planning Control application, for the introduction of a schemed road.

But objectors emphasised that there is no need for the new road: unless there are plans to develop the site further. They also pointed out that the road would help address one of the issues concerning the application: that the units did not have sufficient outlook.

Objectors are emphasising that developing the site would cause various threats to the surroundings, including on the sinkhole itself.

They argue that it would threaten the fragile cave structures that lie around the sinkhole, including the Mensija Chapel, a Grade 1 scheduled site. The project’s visual impact on the area – which also includes two other Grade 1 cultural heritage sites in the form of the Torri Lanzon and the statue of the Assumption – would also be overpowering.

Additionally, they believe, the social fabric of a hamlet which is already challenged by current activity would be threatened further.

In its own objection, the Interdiocesan Environment Commission stressed that the site’s geological and cultural sensitivity had been documented in detail when past applications for development had been refused.

It said that the proposed introduction of a schemed road was in clear conflict with the conservation order governing the site, “because it would drastically alter, and effectively obliterate, the existing topography and morphology of the land surface directly above a significant part of the buffer zone, which is clearly integral to the preservation of the site and its characteristics.”

Over 250 objections had been submitted against developing the site in 2019, and submissions on the planned road (PC/00026/20) may be submitted until Thursday, by sending an email on representations@pa.org.mt or by going on this link and clicking ‘submit representation.’