Partit Laburista members have a great responsibility on their shoulders, Education Minister and PL activist Evarist Bartolo wrote on Facebook on Saturday morning. The party is set to vote in a new leader on Saturday after Muscat announced that he will resign from both his post as a Prime Minister and his post as a party leader in December. 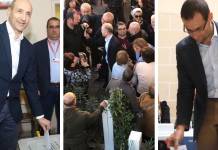 Muscat’s announcement came after Daphne Caruana Galizia murder suspect, Electrogas director and 17 Black owner Yorgen Fenech was arraigned in court and charged with being an accomplice in the murder.

On Facebook, Bartolo said that the paid up members have a right and duty to vote their next leader. Their vote will choose both the next party leader as well as the next prime minister.

Some 17,000 party members are eligible to vote around Malta and Gozo. One’s polling station depends on where one paid their membership fee. Once the party leader is chosen, Chris Fearne or Robert Abela will be sworn in as Prime Minister in the coming days.

Quoting Ġużè Ellul Mercer, Bartolo said that leaders come and go, however, principles remain. He added that the party is founded on principles which do not change.

Partit Laburista will be celebrating 100 years since its inception this year. He said that while a lot of good was done, a lot of work needs to be done to restore Malta’s reputation. Bartolo explained that the person that is need is one that can strengthen and improve the country’s institutions.

Monique Agius   July 2, 2020
The shelter managed by the pro-life organisation is aimed at helping pregnant women who are in a problematic situation and choose life over abortion. The Ministry will be allocating €130,000 in funds over three years to the shelter.