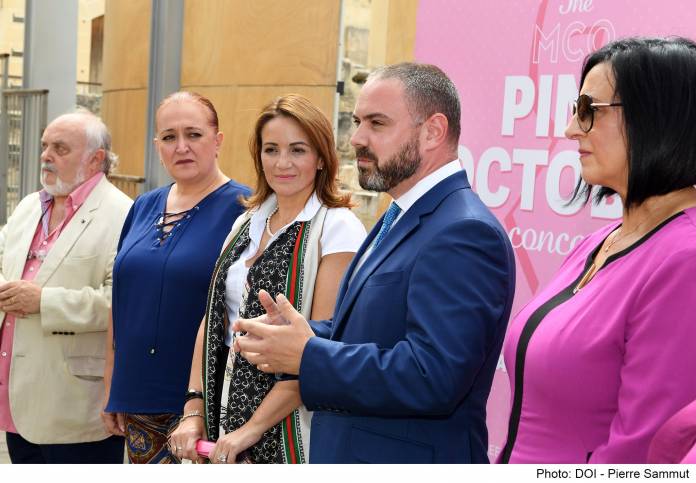 The MCO Pink October Concert will be held on the 11th of October at 8pm at Pjazza Teatru Rjal.

This was announced by the Chairperson of the Marigold Foundation Michelle Muscat and Minister Culture Owen Bonnici.

Along with the Malta Concert Orchestra under the direction of Mro. Joe Brown, the concert will also feature Ozzy Lino, Ritienne, Neville Refalo, Laura Bruno, and Jasmine Abela.

Muscat thanked the organisers for such an initiative. She emphasised the importance of this educational campaign focused on raising awareness on breast cancer but also on common male cancers.

Bonnici stated that the Ministry for Culture is working to raise awareness and support such initiatives through arts and culture. Minister Bonnici concluded by thanking the Marigold Foundation for all their work, and by saying that he’d like to see more events of this nature, which bring together culture and our society for a just cause.

Tickets can be purchased here. All proceeds of the concert will go to the Marigold Foundation, as part of the Pink October Campaign. This concert is being organised by Arts Council Malta, in collaboration with Pjazza Teatru Rjal and the Malta Concert Orchestra.

Amy Borg   August 3, 2020
A Police spokesperson confirmed with Newsbook.com.mt that the incident happened on Sunday at 5 am, in Għajnsielem, in a bar near Imġarr harbour.

Amy Borg   August 1, 2020
MAM said it is disappointed that the Tourism Ministry backed by the office of the Prime Minister not only chose to ignore the advice of the superintendent and authorized mass events but chose those events labelled as “extremely high risk”.