French fashion revolutionary Pierre Cardin was laid to rest at Montmartre Cemetery in Paris. He died on Tuesday at the age of 98.

He was buried in a black coffin adorned with a sword of his own design. The blade resembling a pair of scissors intertwined with the eye of a needle, a thimble and a spool of thread.

Cardin was buried with his former partner Andre Oliver, who died in 1993.

During his more than 70-year career he revolutionised fashion. His modern style helped pave the way a “golden age” of couture in post-World War Two.

The French designer of Italian origins will always be remembered for the invention of the pret-a-porter. The introduction of chic clothes of sartorial inspiration which were mass-produced to wear every day.

He set up his own fashion company in 1950 and made his name with visionary designs like the iconic bubble dress in 1954 and his Space Age collection in 1964.

Cardin was the first to introduce the miniskirt on a catwalk. He also caused a scandal in 1966 when he introduced his sexy tight and slit skirt. 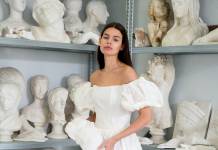