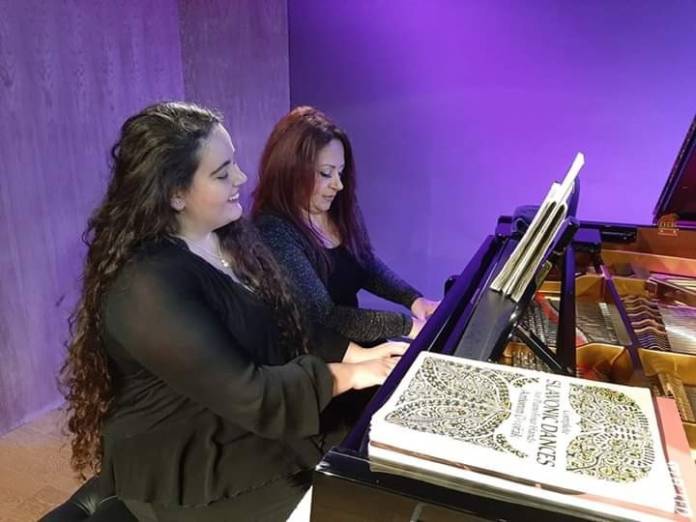 The venue was the cosy auditorium of Palazzo de La Salle, Valletta, which is the HQ, of the Malta Society of Arts, Manufacture and Commerce. This truly enjoyable recital was presented by two experienced pianists. While having separately heard both of them over the years, this was was the first time I heard Leanne Marie Anastasi and Maria Elena Farrugia as a duo. They seemed to be in perfect tandem: balanced and mutually supportive. They complement each other very well and the blend of personalities was tangible, highlighted by a steady sense of purpose, thorough professional sobriety of approach combined with a musicality which reaped rich dividends.

The first part of the programme was one of Schubert’s very late works, the super- Romantic Fantasie in F minor, D. 949 (Op. 103). In one block of music in four continuous sections, it came across with little less than an ethereal opening theme of tragic beauty. It opened the Allegro moderato with an ominous portent her full of pathos and warmth. Deeper feelings were plumbed in the elegiac Largo but a sense of playful rebellion followed in the Allegro vivace (a virtual scherzo) where a willingness to prevail could be sensed and what sounded like a temporary victory vanished when that lovely theme returned with its fusion into the concluding Allegro molto moderato. After steering away from that theme this eventually returned clothed with a sense of resignation leading to a very fine concluding diminuendo to a pianissimo. Six months after finishing this Fantasia Schubert was dead.

The mood changed with three of Dvořák’s 16 Slavonic Dances. With Leanne Anastasi still at the upper half of the keyboard they launched into Op. 46 n. 1 in C Major, a Czech furiant, Op. 46 n.2 in E minor, based on a Serb rhythm akin to the dumka and also in E minor, .Op. 72 n. 2, a Polish mazurka. These three colourful pieces were followed by another three dances which were no less colourful. Exchanging positions the ladies performed three of the Hungarian Dances by Brahms, namely n.2 in D minor, the immensely popular n. 5, in F# minor partly based on a csárdás, then ending with n.8 in A minor, a tempo presto.

The pianists were very enthusiastically applauded and this led to an encore. Seriously prepared but performed with an infectious sense of fun and humour. Randall Compton’s Op. 6 is known as C.S., Theme and Variations for piano four hands (give or take a hand). The C.S. stands for Chop Sticks, great fun indeed but the intricate variations were not all that easy to perform!