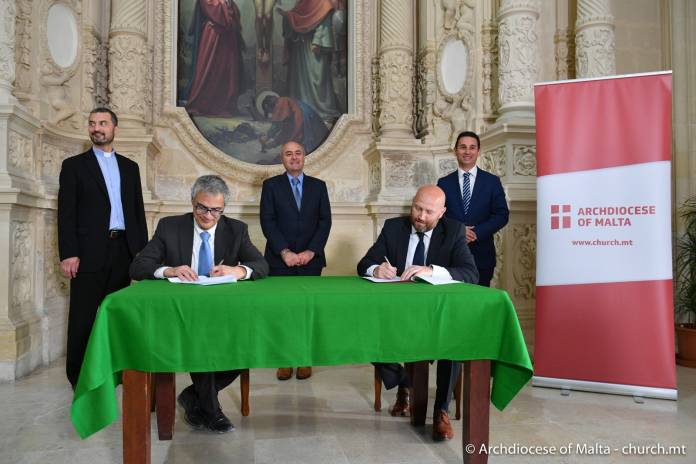 The Archbishop’s Curia has signed an agreement with the Government’s Restoration Directorate which will see the Old Church in Birkirkara restored through public funds, following the necessary geotechnical studies and tests commissioned and financed by the Church.

The agreement was signed today by Roberto Buontempo, Property Manager of the Archdiocese of Malta, and Norbert Gatt from the Restoration Directorate. Speaking at the signing ceremony, Michael Pace Ross, Administrative Secretary of the Archdiocese of Malta, said that the Archbishop’s Curia commissioned a geotechnical engineer to carry out the necessary investigations and to come up with a design solution to address the instability issue of the church.

The test results and the list of interventions emanating from the studies will be shared with the Government and a public call for tenders to restore the church will be issued. Restoration works which will be financed by the Government should be completed by the end of 2024.

On behalf of Archbishop Charles Scicluna, Mr Pace Ross thanked Minister Herrera who is responsible for the national heritage. He added that once completed, this project will mark a historic milestone in safeguarding our heritage for future generations.

The parish priest, Fr Reuben Deguara, noted that the 8th May is an important date for the church as 15 years ago today it was declared a parish dedicated to the Assumption of Our Lady, by a decree issued by then Archbishop Joseph Mercieca.

The Parish Church of Saint Mary in Birkirkara, commonly known as il-Knisja l-Qadima (the old church), was built in the 17th century, and has a renaissance design attributed to architects Vittorio Cassar and Tommaso Dingli. Its roof and dome collapsed in the 19th century, and the church remained in ruins until it was restored in the second half of the 20th century. The church is scheduled as a Grade 1 national monument and it is also listed in the National Inventory of the Cultural Property of the Maltese Islands.