Six schools and a resource centre that were planned to be finished by September 2017 are still pending completion.

According to the FTS, works are underway on the third floor of the new Qawra Primary School. The building is projected to be finished by the end of summer. Mechanical, electric, tiling and plastering works are in progress on the other floors.

According to FTS the site had been shut down by Court order for a five week period because of a fatal incident that happened on the 13th of June.

The school will open its doors during the next scholastic year. 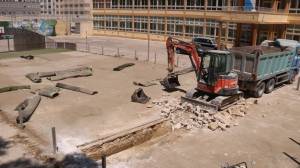 According to FTS, the Victoria Primary School site is going through archaeological studies. These studies were commissioned by the Superintendence of Cultural Heritage. Project plans are also ready and the development is up to the archaeological studies and the issuing of the necessary permits from the Planning Authority.

Permits for the development of the Msida Primary School are still pending for approval from the Planning Authority.

On the expansion of the Rabat Primary School, and the development for a theatre and sports hall at the secondary school in Santa Luċija, the FTs stated the Planning Authority had issued the necessary permits and the periti of projects are preparing the bills of quantities so that the foundation can issue public tenders.

According to the foundation, the Ministry for Education and the same foundation are going through a consultation process for this “unique and ambitious” project.