A Maltese couple decided that their wedding could not be complete without their dog, Muffin. So they decided to do something unusual by making a dogs party before starting the traditional and actual feast.

Christopher Ebejer and Joanna Mallia, who married on the 30th June, talked with Newsbook.com.mt and explained how it has always been planned that during their special day Muffin would be involved, one way or another.

Explained that it was really difficult for Muffin to accompany them for the entire wedding but then, they did everything to find out a way to incorporate it for some time.

To promote the adoption of animals from animal sanctuaries which work against animal cruelty they invited many of Muffin’s “friends” and even prepared a wedding cake for dogs done by very specialized biscuits.

The party was also the famous dog Merci, which is best known because it runs on wheels since her back feet were injured.

The couple decided to also give a sweet donation to AAA and Noah’s Arc.

And guess what … the couple also sent an invitation to every dog ​​who was invited. 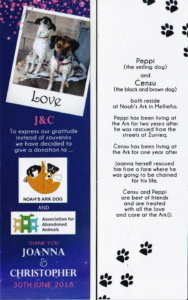 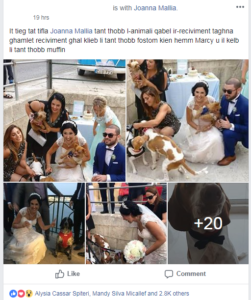