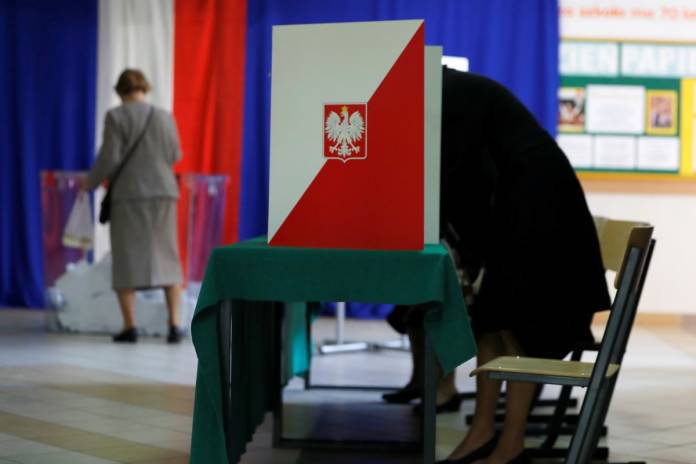 Poles voted on Sunday in an election that is likely to hand the nationalist Law and Justice (PiS) party a second term in office, potentially deepening the country’s isolation as unease within the EU about its commitment to democratic standards grows.

PiS is expected to win more votes than it did in 2015 and may get enough parliamentary seats to continue to govern alone – but the shift in the political climate that it has presided over in the past four years has polarised the country.

The party has cast the election as a choice between a society rooted in traditional Catholic values and a liberal order that promotes a chosen few and undermines family life.

Opposition parties and Poland’s European Union partners say the outgoing government has undermined the independence of the judiciary and the media and made Poland less welcoming for sexual and ethnic minorities.

“We can guarantee that Polish families are protected, that Poland’s freedom is protected and that the Polish Church is protected against attacks,” PiS leader Jaroslaw Kaczynski told supporters in its eastern rural heartland on Friday.

Surveys show PiS winning 40-46% of votes, which may give the party an absolute majority. But it might need to form a coalition, which would raise the possibility of the far-right Confederation – one of three smaller groups that might garner the 5% of votes needed to enter parliament – becoming part of government.

Its candidate for prime minister, Malgorzata Kidawa-Blonska, on Thursday accused Kaczynski of destroying democracy and seeking to sow further divisions. Support for the opposition is strongest in urban centres, where anti-PiS protests have previously drawn thousands of people.

“He is building a huge wall and creating great tensions,” she told supporters on Thursday. “That is why I call on all people of good will … regardless of their political views: let’s defend Poland against such …hatred.”

One of the foundations of PiS success is the way it has tapped into anger among poorer Poles who have missed out on prosperity since the collapse of communism in 1989, mixing nationalist rhetoric with a vast welfare programme that an economic boom has allowed it to implement.

It has drawn on the deeply-rooted popularity of the Catholic Church. Top PiS officials regularly attend Church events and the party has espoused stronger religious values in public life.

The Church does not openly back any party but senior officials have given the PiS tacit support.

On Oct. 1, Poland’s senior bishop wrote that Catholics should vote for those to defend the right to life from conception, support family values and define marriage as between man and a woman.

The party has also shifted Poland’s foreign policy away from the European mainstream, becoming a leading proponent of calls to take some powers away from the EU, with which Warsaw is embroiled in a long-running row over judicial and media reforms.

Brussels has taken legal action to force Polish authorities to row back on legislation it says has politicised the courts.

PiS says the reforms are needed to make the court system fairer and more efficient and plans further changes if it is re-elected.

“A lack of independent courts is not part of the Polish tradition,” Kidawa-Blonska said on Friday.

PiS has also sought closer ties with U.S. President Donald Trump, with whom it shares views on coal mining, climate and abortion – fuelling concern among some western EU diplomats that Trump could use the biggest of the EU’s ex-communist states to sow discord in Brussels over issues such as Iran.

Deeply distrustful of its former Soviet master, Poland has persuaded Trump to bolster Washington’s military presence on Polish soil to counter Russia’s growing assertiveness since its 2014 annexation of Crimea from Ukraine.

On the economy, PiS has promised to shake off the post-communist Polish model that relied on cheap labour by more than doubling the minimum wage over 8 years.

Some economists say the party’s already vast social spending has exposed the economy to too much risk at the time of an economic slowdown in the West, while opposition critics say it has deprived the health care and education systems of funding.

But markets are largely sanguine about the prospect of another PiS government.

John Paul Cordina   February 19, 2020
The Partit Demokratiku is asking Prime Minister Robert Abela to reverse the resignations of traffic police officers allegedly involved in overtime fraud – a move which would enable them to keep their service pensions.

Watch: “Follow your instincts and don’t take life too seriously” – the 103 Breakfast...

Coryse Borg   February 21, 2020
Coryse Borg takes the hilarious 103 Breakfast team - Arthur, Charlene, Ian and Jesmond - for a ride on a TD Plus bus for Personalities OneOnOne!