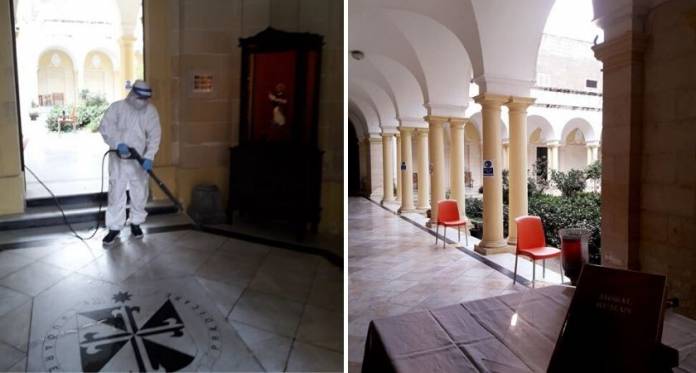 The Dominican friars have had their convent sanitized as they reopened the convent’s doors to funerals.

Funeral ceremonies including Mass, have been banned since March due to the coronavirus outbreak. Funeral ceremonies resumed recently under certain conditions following a meeting held between the Bishops and the health authorities.

On Wednesday afternoon, the first funeral took place at the convent after the Dominican friars were given the go ahead by the ecclesiastical authorities. The funeral ceremony was held in accordance to the regulations issued by the health authorities.

The funeral took place in the monastic garden after it was set up according to the regulations. Attendees were screened for fever and had to wear masks. Stickers were placed to help them keep social distance. The convent was sanitized after the ceremony.

It is unusual for funerals to take place at the monastic gardens which is usually used when friars pass away.

The Dominican community is offering the possibility to organize funerals at its monastic garden giving the public the opportunity to pay their last respects to their loved ones in a safe environment during these unprecedented times.