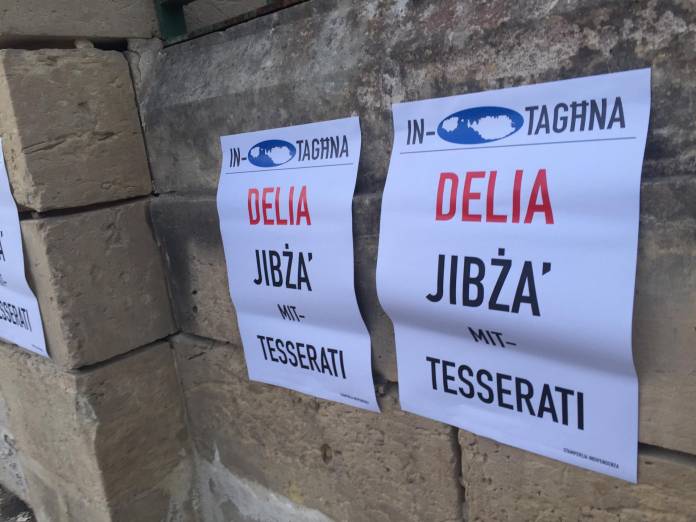 The poster war resumed on Saturday morning, as new ones have been affixed close to Partit Nazzjonalista’s headquarters, and other locations around Malta and Gozo. Newsbook.com.mt had initially spotted the posters outside Dar Ċentrali however later it was brought to its attention that such posters were affixed in other locations; Attard PN club, Lija PN club, Balzan PN club, Sannat, Victoria and Mġarr roundabout.

The message on the posters refers to Nationalist leader Adrian Delia unwillingness to take a vote of confidence within the party’s structures following the defeat at the recently held elections.

The new posters carry the message “Delia is scared of paid-up members”. In a statement, Trapass, reminded that a leader is there to serve the party. They described the Nationalist leader as being unfit to represent the party since he “negates the fundamental principles and values of the party”.  The group further added, that everybody knows that Delia will never be a prime minister, as he is ineligible, making the party ineligible too, the group argued.

Trapass decried Delia’s unwillingness to take his leadership to the test, saying that since the Nationalist leader ‘has refused to do that which his position requires of him, then the responsibility falls squarely on the party’s paid up members’.

READ: Watch: Will you resign Mr Delia? No

Many have called on Delia to take his leadership to a test, including former PN leader and Prime Minister Lawrence Gonzi.

READ: “Ask for a vote of confidence” – Gonzi to Delia

Since the local council and EP elections, a number of posters have been affixed by unknown groups around the islands, some were in favour and some against the embattled party leader who has repeatedly stated that he will not be resigning from his post. On multiple occasions he said that the paid up members of the party have given him a five year mandate, whenever he was asked why he would not ask for a vote of confidence.

Once again Delia was recently asked in Brussels whether he would ask for a vote of confidence, to which he replied that he felt there was no such need.

READ: ‘No need to ask for a vote of confidence’ – Delia