Recently Newsbook.com.mt reported on a property advert ‘mistakenly’ published by the estate agent Engel and Volker which stated that it was offering 17.5 acres of land for €100 million.

After following up on this story, Newsbook.com.mt was informed that the advert was a ‘mistake’, but it had some environmentalists concerned whether it was real or just a ruse.

Newsbook.com.mt went further and spoke to Friends of Malta who themselves had been concerned by the news but were not sold on the idea.

They told us it may have been a way to ‘test the waters’ of public opinion.

‘Testing the waters?’; Friends of the Earth reacts to Comino advert

This time, let’s take a look at the different kinds of flora and fauna that live on the island of Comino.

The Woodchat Shrike often appears on Comino between June until the middle of October, breeding over the Summer months. Its natural habitat is around scattered trees and walls where it preys on large insects like beetles and grasshoppers. It has been known to feed on smaller birds. The Balearic Woodchat Shrike, a variant species, is rarely seen in Malta.

The Whinchat is most commonly found in grassland and is a well-known for appearing in the Spring months of March and early April. The best sightings are found in the mid-April and May, with additional sightings in the Autumn months of September and October. The male has distinct Spring markings with black cheeks with white, deep apricot breast and pale yellowish underside. Females instead have only have a buff stripe over their eye and streaked cap and cheeks. In Autumn, the males have similar colourings to the female.  The bird is known for having a ‘tictic’ or ‘tuctuc’ call mixed with rattles and grunts.

The most distinctive feature of the Starling are its triangular shaped wings which are best seen during its fast flight and rapid wing beats. The bird is known for being sociable, working with other Starlings to forage for food. They are also distinctive for flying in large swarms during the winter and using this technique in numbers to scare off predators like falcons and harriers. The bird is very rarely seen in Malta, especially on Comino. It is understood that they have a very small population on the island. They are best seen during the Autumn and Winter months.

The National Bird of Malta is the Blue Rock Thrush. The male bird is distinct for its blue body and black wings and tail. The female on the other hand is a dark brown.  Aside from appearing on Malta’s former currency, the Maltese Lira, the bird is also well known for its melodic song. The male is understood to sing between February and the end of May. You’ll see them on telegraph poles and rubble walls to name a few perches.

The Skylark is a regular migrant across Europe and also the most common bird shot by hunters during the Autumn and Winter. It is identified by its brown sandy plumage and dark striped back. Like the Starling, the Skylark often flies in flocks and forages for food in groups. The bird is also distinct because of chirruping call shruuup truup!

There are reported to be four sub-species of Maltese Wall Lizard or otherwise known as the Filfola Lizard. They are only found in Malta.  The male lizard is distinguished by its bright colours while the female and the younger lizards are identified by a brown colour. They are known for being a highly territorial animal that reacts aggressively towards other males entering its space.  The mating season is in the Spring and the male attracts females by puffing itself up.

Although not an indigenous species to the islands (originating on the Iberian Peninsula), the wild rabbit is now considered part of the country’s fauna. The animal was widely hunted for food until the Knights of St John decided to institute a ban on their hunting in 1773. This resulted in a revolt by the priests, known as the Rising of the Priests. The rabbits are normally a sandy brown with whiter under-parts.

The Kidney Vetch or Il-ħatba sewda as it is known in Maltese, is a shrub found in different parts of the Mediterranean but over time species have developed their own sub-species because of isolation from the rest of Europe. Scientists therefore consider the Kidney Vetch its own distinct species; melitensis of the wider Anthyllis hermanniae. The shrub is known for being dense and small in size and with dark green leaves. In Spring the shrub produces yellow flowers.

The Tamarisk Tree or African Tamarisk are an indigenous species to Malta that is understood to have existed on the island long before man. The tree is known to flower between January and March.

The Sea Daffodil is considered on the most beautiful and elegant flowers found on the island. It is known to grow in sand close to the sea. The species is hard wearing and understood to be able to store enough food and water to survive the heat and humidity. The flower blooms between August and September.

Otherwise known as the Marguerite or Paris Daisy, the plant is regularly cultivated for agricultural or horticultural uses or found in the wild. The flower is distinct because of its petals and centre, flowering in the period between May and August.

The Aleppo pine tree is not a native species to the Maltese islands or Comino for that matter. It is understood that the species was probably introduced to Malta in the last five centuries.

The Maltese Toadflax plant is now listed as a vulnerable endemic protected plant according to the International Union for the Conservation of Nature’s Red List (IUCN). It is often spotted in Spring time. 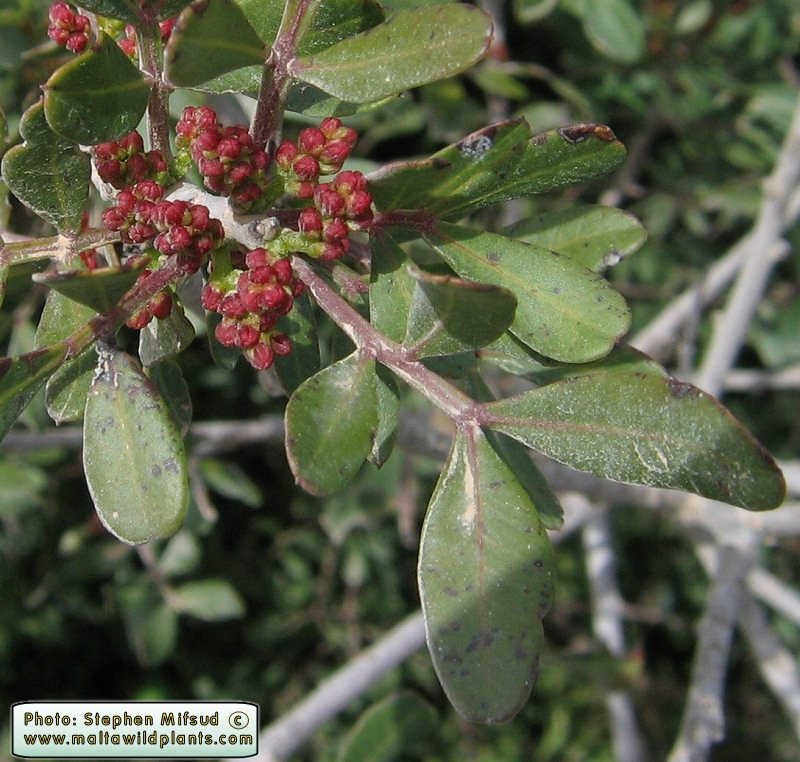 The shrub is known to grow in dry rocky and salty environments close to the sea or on valleys. The Lentisk can grow to 7 metres and produces small flowers in Spring followed by small red berries in Autumn. These berries often form the food for many migrating birds using Comino to rest and transit from. The bark of the tree is known to weep sap in the summer and harden in the winter months.

A very common plant found across Malta, Gozo and Comino which grows on the side of roads and country lanes. The plant is perennial and flowers during the period of March and June.

As part of repopulating Comino’s ecosystem, the Environmental Resources Authority sought to planting more trees that were indigenous to the island.

The pictures below show the cordoning off of ecologically-important sand dunes in Santa Marija Bay, the removal of alien species of plants (e.g. Agavespp.) and the planting of indigenous species of trees.