Carnival 2020 comes to an end today but it leaves behind numerous memories of a fun time which was had by both young and old.

The creators of the floats really outdid themselves this year with one float being made out of an effigy of US President Donald Trump, ex-Prime Minister Joseph Muscat, Leader of the Opposition Adrian Delia and even Tribali frontman Peter Paul Galea. 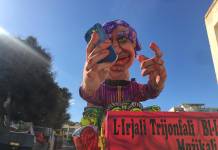 The costumes were as lavish and spectacular as always.

Carnival hotspots Valletta and Nadur were buzzing with people having the time of their lives before Lent.