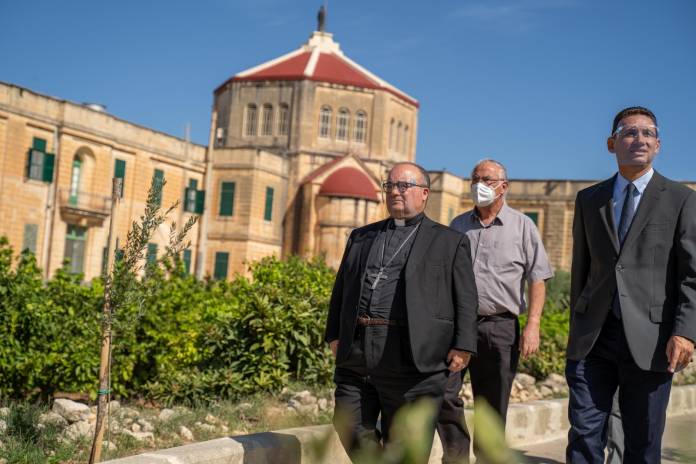 Archbishop Charles Scicluna expressed his appreciation for the 1,400 trees being planted by Infrastructure Malta in the gardens of The Home for the Clergy in Birkirkara.

The Archbishop stated that the trees are a green lung not only for the clergy residing with the home, but also for Birkirkara residents. Infrastructure Malta has surrounded the residence earlier this year by planting 700 cypress trees around the gardens’ perimeter. It is currently planting another 700 trees, including carobs, Judas trees, bay laurel, olives and oaks, as well as fruit tree species such as white and black mulberry, pomegranate, plum, apricot, peach and apple.

The Administrative Secretary for the Archdiocese, Michael Pace Ross, stated that the Church and Infrastructure Malta are working together on several other projects. These include a regeneration of the outside of the Rabat Church, as well as the Santa Luċija Church. He also outlined works in the Domus and the Salesian Oratory in Dingli and Mosta, in collaboration with the Government.

Infrastructure Malta is installing a new irrigation system for the new trees as well as several outdoor benches in different areas of the garden. With the support of other benefactors, the Home is also incorporating a new rosary garden and an indigenous grove that can eventually be opened for educational school visits. Other parts of the Home’s grounds will continue to be used as a kitchen garden where this community can grow its own herbs and vegetables.

Poland’s bishops exhorted to do more against paedophilia