The Malta Chamber of Pharmacists has voiced its concern on the fact that pharmacists and doctors are not included in the conscientious objection clause in the Equality Bill.

The bill is currently at the Adjunct Committee for the Consideration of Bills and it is at its final stages.

In a statement on Wednesday, the Malta Chamber of Pharmacists said that it has forwarded its submissions on the inclusion of a Conscientious Objection Clause in the Equality Bill 96.

The chamber expressed its grave concern after noting that in the Section 6 (Exceptions) of the Equality Bill, the conscientious objection by health care professionals (pharmacists and doctors) is not contemplated. It noted that by leaving out such a provision, pharmacists would face serious conflicts.

Bishop of Gozo Anton Teuma in a recent homily said that schools cannot rely simply on the content of their lessons, but they are in need of exemplary educators who set a good example through their lives. 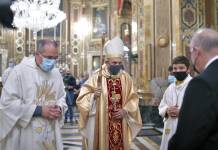 The submissions made by the Malta Chamber of Pharmacists may be found here: