After the hugely successful streaming online of the Phantom of the Opera last week – with with over 11 million people watching from home – this week it is the turn of its sequel Love Never Dies.

This is the latest production announced as part of the ‘The Shows Must Go On’ initiative which makes Andrew Lloyd Webber’s back catalogue available to people at home.

The story is set 10 years after the events of The Phantom of the Opera. The Phantom has escaped to a new life in New York. He is stilling pining after Christine… whose marriage to Raoul is not going so well. When he invites her to perform at a renowned opera house, she accepts.

The 2012 production stars Ben Lewis and Anna O’Byrne, and will be available to watch for 48 hours from Friday 24th April at 8.00 CET on The Shows Must Go On YouTube channel. 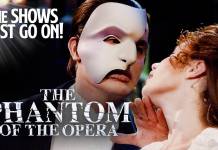 Creating a better and healthier place for all by 2030

Watch The Sound of Music online for free

Watch Lloyd Webber’s Phantom of the Opera online for free