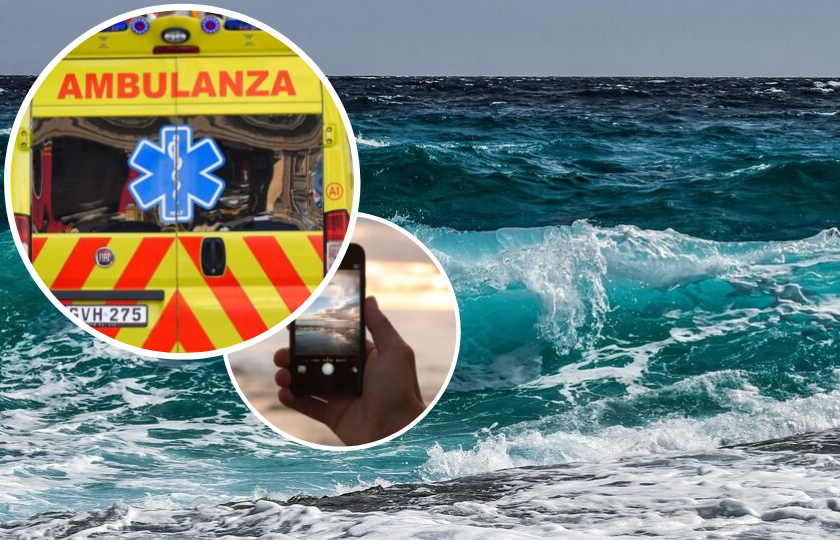 A married couple that was vacationing in Malta said that although they believed that their lives were over, many bystanders reacted by taking videos.

John and Gail Kelly from Scotland told The Scottish Daily Record that on the 28th of July, waves and currents pulled them from the shore into deep seas in Qawra. The couple stated that they thought their lives were over.

“I was screaming for help, yet people just stood there taking videos”

Gail explained that she was sitting on a stone pillar that fishermen tie their ropes around, chatting to people; and then suddenly she was drowning.

She added that since she still had her rucksack on, it was weighing her down. “I was in a panic, but they got me out and it was then that I noticed John was in the water”.

Gail stated that although some people were trying to calm her down, she was still panicking because she could not get to John. Fearing for her husband, she continued to shout for help, however, she said that many people just stood there videoing.

The Scottish Daily Record praised bystanders Jeffery Schembri and Vlatko Jordanoffsky’s actions, who were described as “springing into action” when saving Gail from the sea.

The Kellys expressed their gratitude towards the men and said that they were lucky that two strong swimmers happened to be on the beach at the time.

Schembri explained that he has been snorkelling since he was a child and was used to swimming in strong currents. Jordanoffsky is believed to be a former army soldier.

After the rescue, the couple were believed to have been taken to hospital where they spent the next five hours.

John was in the water for 15 minutes. He suffered lacerations on his arms, back and legs that he says he suffered in the initial fall.

The couple is now believed to be back in Scotland, and John is due to get his stitches out this week. Although Gail is due to continue work, she says she has had trouble sleeping and is restless.

“Malta now will always have a special part in our lives”

John stated that despite the experience, it will not put them off returning to the holiday island.

He added that “We would go back. No doubt about it. The rescuers, hotel staff and paramedics all said don’t let this put you off and we won’t. Malta now will always have a special part in our lives.”

Motorcyclist fights for his life after road accident in Qawra