People will return to Valletta on Tuesday evening to demand justice for slain journalist Daphne Caruana Galizia. The monthly vigils held at Great Siege Square will be back following a brief hiatus due to the outbreak of coronavirus in Malta. Those in attendance are being asked to wear a mask or a visor and observe social distancing rules.

Caruana Galizia was assassinated in a car bomb 32 months ago, on 16 October 2017, outside her family home.

Since then, activists have set up a makeshift protest memorial outside the law courts demanding justice.

Following the testimonies heard in court on Monday, civil society group Repubblika and pressure group Occupy Justice have announced that the vigil will take place this evening and will start at 7.30pm. 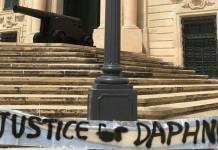 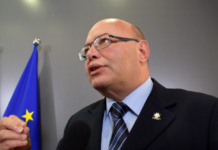 “Corruption is a virus – stop the spread”

Activists from Occupy Justice unfurled a banner outside the Office of the Prime Minister describing corruption as a virus which needs to be stopped.

The group noted that while Malta was effective in its fight against the coronavirus which was previously unknown, the country failed miserably at tackling rampant corruption that infected the country’s institutions.

Malta had lived through the coronavirus pandemic and was gearing to get back to “normality”. But was this “normality” the same as that promoted by disgraced former Prime Minister Joseph Muscat together with his cronies since 2013, Occupy Justice asked.

Occupy Justice maintained that nothing has been done to stop corruption.

“The real virus that has taken over our country is corruption. Covid19 may be under control, but corruption is alive kicking and spreading by the day, and Prime Minister Robert Abela seems to have neither the inclination nor the will to stop this spread.”

The pressure group asked how people whose name repeatedly cropped up in the court proceedings, such as disgraced Chief of Staff Keith Schembri had not been arrested.

It also asked why the police had not questioned disgraced Minister Konrad Mizzi over the ‘dirty and corrupt deals’ he was involved in mainly the power station contract and the selling of three state hospital.

On Monday the court ordered the Police to place former Police Commissioner Lawrence Cutajar under criminal investigation after the new details which emerged during the sitting.

“It is now more than evident that protestors were right in calling for the removal of the likes of Silvio Valletta and Lawrence Cutajar, ex-deputy police commissioner and the ex-top man himself, respectively, both also mentioned repeatedly in court proceedings. What has come to light is sickening and shows that these two individuals were actively contaminating any form of progress in the investigations,” Occupy Justice said.

“Our “normality” will resume, as will our protests,” the statement reads.

Reuters   July 10, 2020
"Around the world the pandemic is in its most acute phase. We cannot waste the sacrifices the Italians have made in recent months," Speranza said.