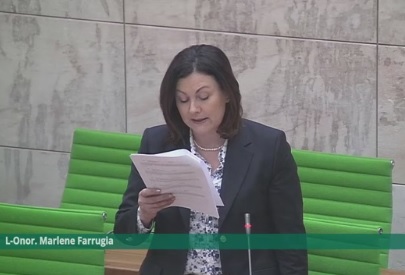 The Partit Demokratiku have expressed their agreement with the Venice Commission’s Opinion, but disagree with the Government asking a Steering Committee to debate it. PD called for the Government to discuss reforms in Parliament, followed by the Constitutional Convention.

In a reactionary statement to the reforms vehemently recommended by the Commission, the PD said that they are for an “all-round commitment” to implementation. PD MP Marlene Farrugia added that this cannot just be seen as a step, but there needs to be a move towards a finish line. “Constitutional reform has been delayed and repeatedly delayed capriciously by both PN and more so by PL,” she added.

PD MEP Candidate Anthony Buttigieg meanwhile expressed the party’s reservations with the Government asking a Steering Committee, which he dubbed “a committee of political representatives with no clear terms of reference and with no basis at law – to debate the report in secret.”

Farrugia added that, “This is not about PD or other political parties being left out, it’s about civil society, trade unions, media, judges, lawyers, the chamber of advocates, NGOs, and a number of stakeholders being left out.”

What are PD’s reasons for disagreeing?

Meanwhile, in a separate statement, Civil Society movement Repubblika said that the Venice Commission’s report reflects their own concerns about the lack of strong democratic structures in Malta.

According to the activists, democracy does not only mean elections every few years, insisting that there need to be constitutional structures which ensure separation of powers, and a powerful system of checks and balances. The movement added that the Prime Minister has too much power leading to a situation rife with potential for abuse.