The public inquiry into the murder of journalist Daphne Caruana Galizia continues.

Apap Bologna said that he was aware.
Amy Borg
12:31 "Have you met the director of siemens this week?" – Dr Azzopardi
Amy Borg
12:30 "Is it true that you donated €1 million to the Labour Party?" – Dr Azopardi

"Are you sure?" – Dr Azzopardi

"No he did not" – Apap Bologna
Amy Borg
12:24 "How come before Konrad Mizzi came up with the exact amount of the cost of the project in January 2013? And do not tell me to ask Konrad Mizzi" – Dr Azzopardi

Paul Apap Bologna smiles and says "I do not know"
Amy Borg
12:23 The witness states that he would have to check about that.
Amy Borg
12:18 Dr Azzopardi quotes an article from Daphne's blog – about the insurance of the project which would take around a year to be completed

"I do not remember" – Apap Bologna
Amy Borg
12:11 "The call for expressions of interest by Enemalta was just a month after the general election of 2013, were you at any time privy to discussions with Enemalta?" – Dr Azzopardi

"No" – Apap Bologna
Amy Borg
12:05 "You confirmed in the presentation, that for Malta to enter into a purchasing power agreement; the govt needed to guarantee Enemalta's standards meet international standards
payment based on capacity made available , amongst other tems.
Amy Borg
12:03 "Before January 2013 it is a known fact that there were meetings at level 22 between Muscat, Gasan and Fenech" – Dr Azzopardi

Lawyer Jason Azzopardi said "this is nonsense"
Amy Borg
11:30 "Were you aware that your company was in default?"

"No, I was not aware as the financial situation was handled by another company" – Apap Bologna

"When did you know the company was in default?" – Comodini Cachia

"So you were made aware just now with my question?" – Dr Comodini Cachia

In August, the son of the slain journalist outlined the scenarios which would have taken place had they published the stories and revealed that the Dubai based company 17 Black was owned by the director of Electrogas and, furthermore, that it had promised a bribe to the Energy Minister.
Amy Borg
11:17 "Yes, of course, I have been and still am very concerned" – Apap Bologna
Amy Borg
11:16 "Clearly you are not concerned about all this" – Madame Justice Lofaro
Amy Borg
11:16 "That is an unfair accusation towards the company" – Apap Bologna
Amy Borg
11:15 "Probably if Daphne hadn't been killed she would have published the information she had received on Electrogas and the government-chosen consortium would have gone into liquidation," said the inquiry board
Amy Borg
11:11 The board now asks why was Electrogas was not making any profit.
Amy Borg
11:09 "Why didn't you at least change the audit firm of GEM Holdings? Even after the allegations on Nexia BT nad Pilatus Bank emerged," – Dr Comodini Cachia

"We Discussed this on board level, and it was decided that Nexia BT was doing a good job so we kept them." – Apap Bologna
Amy Borg
11:09 Apap Bologna was evasive in his reply and said that as he already mentioned he was looking into it.
Amy Borg
11:07 "You read so many things in the newspapers, what did you do?" – Dr Comodini Cachia

"But Gasan took a different approach to the situation, why didn't you?" asked Madame Justice Lofaro.
Amy Borg
11:05 "How long have you known Brian Tonna from Nexia BT?" – Dr Comodini Cachia

Paul Apap Bologna said he met him a few times.

"Nexia BT was the audit company for GEM holdings" – noted Dr Therese Comodini Cachia.
Amy Borg
11:03 Lawyer Charles Mercieca, from Yorgen Fenech's defence team, has just entered the courtroom.
Amy Borg
11:02 "As directors, we had the obligation to do it" – Apap Bologna
Amy Borg
11:01 He continued saying that pwc had advised that they conduct an audit from a financial and a forensic point of view.
Amy Borg
10:57 "Did you communicate with Socar abut Musayev? You had two directors involved in the allegations" – Dr Comodini Cachia

"We had spent a lot of money on an investigation on Electrogas. We did a full report from day 1 of the project and no wrongdoing was found." – Apap Bologna
Amy Borg
10:56 I never spoke to Turab Musayev after his resignation, said the witness.
Amy Borg
10:54 "Where you aware what was happening in Malta in December 2019? Was there correspondence of Fenech's resignation?"- Dr Comodini Cachia

Apap Bologna said that he knew when it was reported in the media.

"The board had asked him but Yorgen did not give us an answer if it was his," said Apap Bologna.
Amy Borg
10:41 The witness became the Director of the consortium in November 2019.

"Didn't you ask him why? He took your project as according to you he was more experienced, but when he resigned you actually did not ask him why?" – Dr Therese Comodini Cachia.
Amy Borg
10:41 The board reminds the witness that he is under oath.
Amy Borg
10:37 "How is it possible that you were aware of the leaked e-mails in December 2017 when Daphne was killed in October that same year and she had already mentioned in her articles that e-mails from Electrogas were leaked," said the board.

"Have you ever read Daphne's blog?" asked Madame Justice Lofaro

"Do you expect us to believe that with your involvement in the project and all that was Daphne publishing on the Electrogas project you read her blog occasionally?" – noted Chief Justice Emeritus Joseph Said Pullicino.
Amy Borg
10:35 When the Panama Papers were revealed checks were made to confirm if any transactions were effected said the witness. He also said that no such transactions were found.
Amy Borg
10:33 He also mentioned that they found out about the e-mail leaks from Electrogas serves on the 27th of December 2017. Till this day they are not aware who was behind the leaks.
Amy Borg
10:32 "Panama Papers were also a concern to us" – Apap Bologna
Amy Borg
10:30 "Was there an internal audit when connections of 17 Black to Electrogas were being made?" asked Dr Comodini Cachia

He said that they had a board meeting when the allegations on 17 Balck came out.
Amy Borg
10:30 "No I did not know. I became aware after we were awarded the contract" – Apap Bologna.
Amy Borg
10:29 "Did you know he had contacts or any relations with Joseph Muscat, Keith Schembri and Konrad Mizzi?" asked Madame Justice Lofaro
Amy Borg
10:25 "Why was Yorgen Fenech the leader of the project?" – asked Dr Comodini Cachia

"Mr Fenech when it comes to big project managements has more experience than myself," – Paul Apap Bologna

"So back in 2007 and 2008 when Yorgen Fenech was not involved, you had the expertise?" asked Madame Justice Lofaro.
Amy Borg
10:23 "Back in 2007 and 2008, it was only myself and the Gasan family interested in the project. I hardly knew Yorgen Fenech at that time and I am related to the Gasans," said the witness.
Amy Borg
10:22 He confirms that it is the same presentation presented by the team.
Amy Borg
10:22 Dr Comodini Cachia has handed a presentation to the witness.
Amy Borg
10:20 "Do you exclude mentioning the project to Joseph Muscat when you met him a couple of times socially?" – asks Dr Comodini Cachia

"I never discussed it with the Labour Party" – replied the witness.
Amy Borg
10:20 Lawyer Therese Comodini Cachia is now asking questions.
Amy Borg
10:17 The board asks if the expression of interest was tailor-made for Elecrogas.

"I totally disagree with that," said the witness.

"We presented the proposal in the same time frame that was available of the 18 other bidders," said Apap Bologna.
Amy Borg
10:15 "Were you happy with the involvement of Azerbaijan in this project?" asked Madame Justice Lofaro.

"They were traders in oil," said the witness.
Amy Borg
10:14 "We contacted the pwc, there were serious companies involved in this" he said.
Amy Borg
10:12 We spoke to EDF as a cousin of mine works there, said Paul Apap Bologna.

We met with Siemens here in Malta which came through Gasol as was Socar, explained the witness who also confirmed that the discussions were concluded in six weeks.
Amy Borg
10:09 The witness can be seen as being quite nervous while answering questions.
Amy Borg
10:07 "What is for sure is that the lead person of the project was Yorgen Fenech," said Paul Apap Bologna.

"No I did know about his connections", insisted the witness.

"That was a bit naive of you" noted Madame Justice Lofaro.
Amy Borg
10:04 He said he never met Joseph Muscat.

"How is it possible? It was in your interest to meet the future prime minister" said Madame Justice Lofaro.

"An election had to happen before he was chosen as Malta's PM" said Apap Bologna.
Amy Borg
10:03 The witness also said that it was Yorgen's father who contacted Joe Gasan as they were in constant contact due to joint business ventures.
Amy Borg
10:02 He continued saying that he met with Fenech about this project in mid-January 2013.

He then spoke to Yorgen's father. Then they contacted Joe Gasan to see if they are still interested in the project.
Amy Borg
10:01 Madame Justice Lofaro warns the witness to be careful when answering the questions.
Amy Borg
10:00 He confirmed that he met Konrad Mizzi for the first time after the contract was awarded.
Amy Borg
09:59 All the other international companies were not part of the team anymore. The only company present was Gasol, said Apap Bologna.
Amy Borg
09:58 "That is very hard to believe – How did such a project happen so fast after the Labour party was elected?" asked the board.
Amy Borg
09:57 The board asks if he had met with Konrad Mizzi before the election to discuss the project.

He replied: "Not that I know of"
Amy Borg
09:56 The expression of interest was presented after 2013 election
Amy Borg
09:54 He continued saying that that the presentation presented to the labour government had different concepts from the proposal presented to the PN government.
Amy Borg
09:51 The witness said that from their end as a team the same presentation with the exact same details was presented to former Prime Minister Lawrence Gonzi, to the Environment Minister, Minister for Infrastructure and even to ERA, said Apap Bologna.
Amy Borg
09:49 Apap Bologna continued saying that it was George Fenech who spoke to Gasan about the project.
Amy Borg
09:48 "I had spoken about this project to Yorgen Fenech. I know Fenechs. I bought my first house from the Fenechs. They are in big projects so it made perfect sense to me to speak to him."
Amy Borg
09:47 He also said that he did not speak about this project to the opposition – that is the Labour Party – at any stage.
Amy Borg
09:46 He said that at that stage he did not speak to the Opposition. 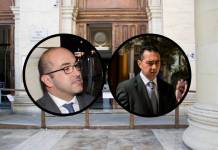