Parliamentary Secretary for citizenship Alex Muscat told the board of inquiry that he had told disgraced then minister Konrad Mizzi and then OPM Chief of Staff Keith Schembri that they should come clean on their Panama structures following the reveal.

Taking the witness stand on Friday morning, Muscat testified during the public inquiry into the murder of journalist Daphne Caruana Galizia is tasked with, amongst other things, determining whether the state did all it could to prevent the murder from happening.

Muscat who for a period served as Schembri’s deputy, told the board he knew the latter pre-2013 but got to know him in his professional capacity following the 2013 election.

The parliamentary secretary served within OPM secretariat as policy coordinator prior to serving as a deputy chief of staff.

Asked about consultancies he carried out for Nexia BT, Muscat said that he did not seek any permission from his superiors since he was employed as a person of trust.

The Inland Revenue Commissioner Marvin Gaerty also took the witness stand. He clarified that the message he sent to murder suspect Yorgen Fenech and for which he was questioned by the police was related to a VAT issue. Gaerty said that the contents of the message were identical to an email he had sent Fenech through his work email.

During the sitting, it transpired that Gaerty was yet to receive a list of individuals and organisations for which he would seek dispensation from the prime minister prior to investigating them and presenting evidence in the proceedings. The list was given on Friday to the Tax Commissioner’s lawyer.

The next sitting is on Monday when former Economy Minister Chris Cardona is expected to testify.

11:16 The next sittings are on Monday at 1pm and Friday at 9.30am.
Monique Agius
11:15 A tentative date is given, Gaerty will be summoned again on Friday 20 November.
Monique Agius
11:14 Lawyer Vincienne Vella appeared for the Tax Commissioner. She was given the list of people about which Gaerty will seek to obtain the PM's dispensation to give information and testify.
Monique Agius
11:12 "I knew beforehand about the issue [17 Black], and had they wanted to speak to me about it, I would have never attended any meetings," Gaerty asserts.
Monique Agius
11:11 Dr Azzopardi asks the witness whether Fenech's lawyers had asked for a meeting after it was revealed that 17 Black was owned by Fenech.
Monique Agius
11:10 Gaerty says that the meetings were not related to 17 Black.

"Absolutely not related to 17 Black. What I can say is that it was a VAT issue," Gaerty tells the court.
Monique Agius
11:10 Gaerty says that he had met Fenech and with his lawyers at his office. One of the meetings was held at his lawyers' office because of the number of people present.
Monique Agius
11:07 Gaerty says that he had a 10-15 minute informal meeting with the police regarding a message he had sent to Yorgen Fenech.

The tax chief says that the contents of the message are identical to an email he had sent to him through his work email.
Monique Agius
11:04 Dr Comodini Cachia explains that the witness should inform the court:

Whether the prime minister has given full dispensation with regards to the different individuals and companies, and in case where dispensation was refused, the witness should have the grounds on which it was refused as well as in cases of restrictions this should be flagged.
Monique Agius
11:03 There was a misunderstanding and the court's deputy did not forward the list to the witness.
Monique Agius
11:02 Dr Comodini Cachia says that the list had to be sent by court officials. Gaerty needs to obtain clearance from the prime minister first to be able to investigate the listed individuals.
Monique Agius
11:00 Judge Mallia asks him whether he has brought the evidence regarding a list of individuals, he had to investigate.

Dr Comodini Cachia: not even WhatsApp?

"I knew him as an individual but never communicated with him?" Muscat says.
Monique Agius
10:10 He says that this was why he had given them his opinion.
Monique Agius
10:09 The parliamentary secretary says he got to know that the Panama Papers reveal was true because both Mizzi and Schembri had issued statements on the offshore structures.

Madame Justice: Had you been satisfied with their statements, you wouldn't have spoken to him?
Monique Agius
10:08 Muscat says that he never had a copy of the FIAU report and had only read conflicting reports in the media.
Monique Agius
10:07 Schembri was involved in the organization PL mass events pre-2013, Muscat recalls.
Monique Agius
10:06 Muscat would only attend meetings in which he would be given work.
Monique Agius
10:04 Asked about his role with government, Muscat says his role was to help with coordinating national projects between various ministries. He would be delegated work by Schembri.
Monique Agius
10:03 Dr Comodini Cachia refers to his previous reply about "coming clean", she asks why he had said this.

"The structures were used to damage the government," he remarks.
Monique Agius
10:01 Asked about Nexia BT's involvement in setting offshore structures for Mizzi and Schembri, he says that this became known when the information was published.

"I didn't change my opinion on Nexia BT because as far as I know, Nexia BT's accountants did nothing illegal," Muscat says.
Monique Agius
10:00 Dr Comodini Cachia takes over questioning, with Dr Lia objecting saying that it is not relevant to the terms of reference of the public inquiry.

Replying to questions by the board, Muscat said that he had no retainer.

"Had I had a conflict of interest, I would have declared it," he says.

He says that he had seen Fenech perhaps once in the waiting area. But he could not tell if Fenech had more meetings at OPM, explaining that there are more entrances to the offices without having to pass through the secretariat.
Monique Agius
09:48 Muscat is now asked about the FIAU reports.

The board presses the witness to tell what he had told Schembri.

Following a few more questions, Muscat says that he had told Schembri and Mizzi that "they should come clean on it".
Monique Agius
09:44 Muscat was abroad when investigative journalist Daphne Caruana Galizia was killed. He explains that he was part of a delegation and it was a PN MP on that same delegation who informed him about the assassination.

"Upon my return, I found what I had expected. A sense of great shock," Muscat says.
Monique Agius
09:42 Judge Mallia asks whether the process leading to the selection of Electrogas was vetted by OPM.

"As far as I know, it was never led by OPM," he replies.
Monique Agius
09:42 The former OPM deputy chief of staff says that he did not replace Schembri during cabinet meetings when the latter was away.
Monique Agius
09:40 "The power station project we were given a high-level project, as a political strategy. Prior to 2013 election," Muscat remarks.

The presentation was done by Konrad Mizzi, it was a "political strategy" to all general elections candidates, Muscat recalls.
Monique Agius
09:38 Judge Mallia asks what was the involvement of the office in major projects.

Muscat says that the Electrogas project fell under the Energy Ministry headed by Konrad Mizzi. He says that he was never involved. Muscat explains that OPM employees were never given a presentation on the project.
Monique Agius
09:37 Muscat was a Mosta local councillor and a general election candidate. He explains that he would work at a district level but was not working at CNL.
Monique Agius
09:36 Muscat knew Schembri before 2013, he knew him as a person who worked within PL. He got to know him professionally.

Muscat was elected for the first time to Parliament in 2017. He had served as the OPM’s deputy chief of staff during that year.

On Wednesday, Nexia BT’s Brian Tonna and Karl Cini took the witness stand and chose to remain in absolute silence. 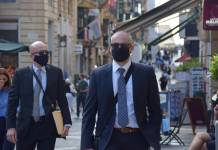